Fresh off the heels of my successful running of the 100k Quebec Mega Trail, and leading up to my next major race of the year (the Canadian Death Race), I decided I wanted to keep the momentum going by taking on a shorter race not TOO far from home. After consulting a calendar (and past experience), I decided to head on down to Ithaca, NY and tackle the Cayuga Trails Marathon race course. I’ve done the 50 miler twice, but decided that a single loop of this beautiful yet challenging course would be enough for a good weekend workout. What’s more, I had friends going AND Deanna was also going to run the marathon. Sounds like a great weekend, right? Read on for the story of the event!

The Cayuga race is notable for a few reasons. Firstly, Ithaca is a “Gorges” place (get it? Ha ha!). The race takes place in two different state parks, both featuring amazing canyons and gorges and stone steps along the distance. Secondly, it is the site of the USA Track and Field 50 Miler Championships, so it attracts a pretty speedy group of runners. Lastly, in spite of both these things, it has retained a small-town race feel, and has a great overall vibe, not to mention that we can camp near the start / finish in the state park with other like-minded individuals. 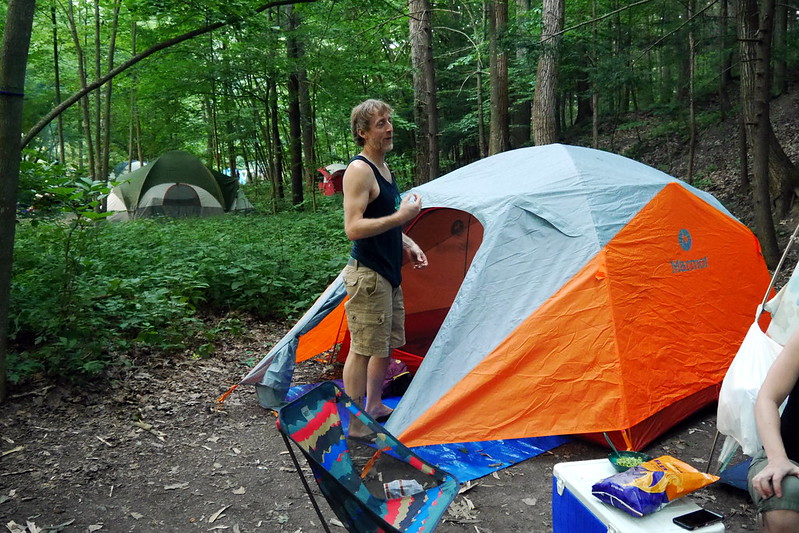 And camping is exactly what we did this year. Three other friends were also down with us, and camping across the lane from us, so we had plenty of company / commiseration with us. On the eve of the race, we hung out a bit, shared a few laughs, and got ready for the challenge ahead. 3 of us were in the Marathon, and the other 2 were in the 50 Miler. The only negative was that there was a campsite with far too many kids near us, and they were quite noisy much later into the evening than we would have liked. Regardless, my race didn’t start too early, so I wasn’t too annoyed. 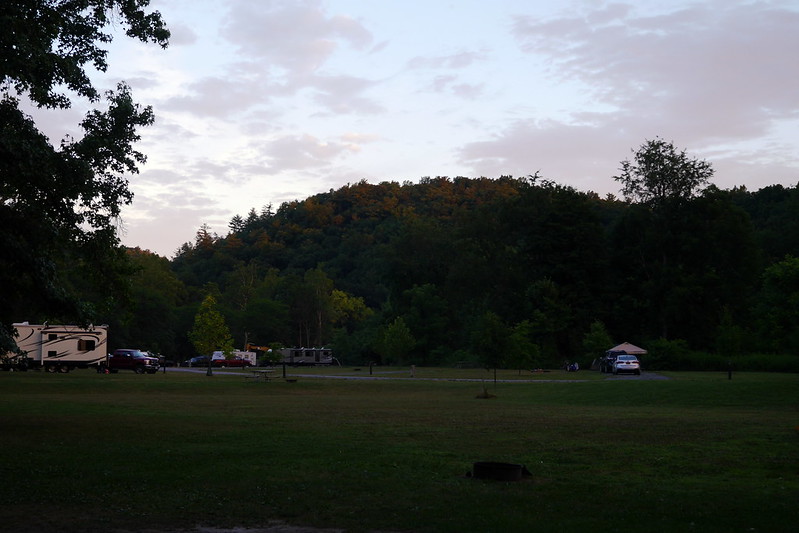 To make things interesting, my race kit consisted, for the first time in a long time, of NO pack. I was trying out a new race shirt that had 4 pockets built in. Within those pockets, I could basically carry all I needed, along with carrying a full water bottle in my hand. This should in theory have made me faster and cooler. I was filming the race (see video at the end), so still had to carry a camera with me. Apart from that, I had a mini first aid kit, food, a tube of nuun, an empty soft flask, and pace cards. Nothing too heavy or bouncy, but everything I’d need if required. Luckily, aid stations were spread out quite evenly, with nothing longer than about 9.5km. I looked fast, and felt good, time to test it all out!

After my normal pre-race breakfast of a smoothie and yogurt with granola, we drove over and parked near the start/finish (even though it was only about 1km from camp…). That way I’d have a camp chair with me, change of clothes, and food waiting right at the finish. It was probably the most low-key start to a race other than Mad Trapper races. The RD wasn’t even onsite until about 7 minutes prior to the start. The 50 miler had started a couple hours earlier, and that was where a lot of the attention was. In spite of the quiet start, racers had self-assembled and were just awaiting final words and the start signal. At 8am we were off and running! 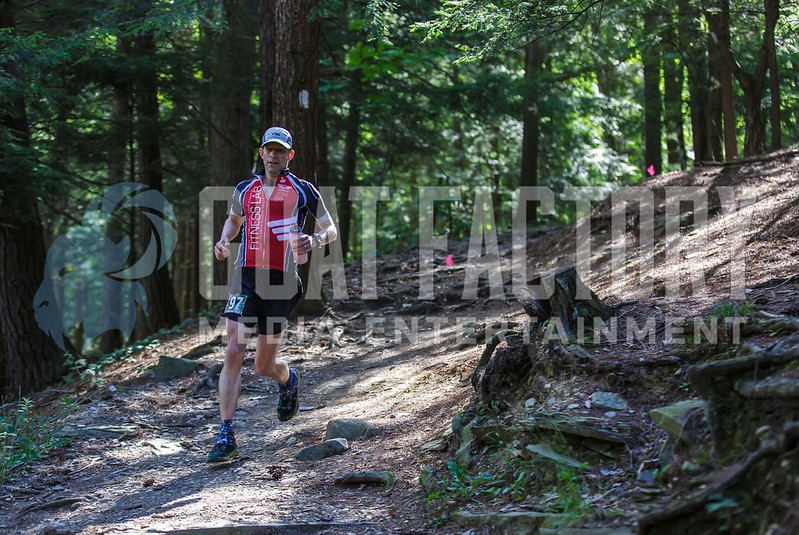 I started out just behind the lead pack of 20 or so runners. I kept them in my sights, but knew that there were at least some in that crew that would be keeping a pace there was no way I could hold, so I just let them open up a slight gap, and focused on a clean pace, that I could hopefully hold the entire 42k course. While we start with a flat, open field, it isn’t long before we turn and head upwards into the first gorge section, complete with steep stairs and great views. I found myself in a bit of a secondary pack of racers, and figured I could keep step with these folks, so we fell into a nice rhythm, and also chatted a bit as we turned over the kilometers. One guy in particular, Tim, ended up running with me almost the ENTIRE 42k! I’ve never had that in a race. It was pretty cool, but since we were pushing a fair bit, long, expansive conversations couldn’t really be had!

After cruising into the first station, filling up my bottle and heading back off, we entered another great gorge section, and also were treated to the sounds of bagpipes filling the canyon around us. Each year, it seems an intrepid Bagpiper makes his way into the gorge and plays for the runners. It makes for a pretty neat experience. The weather was pretty much perfect for us. It was a nice day, but not so hot that it was unbearable. I was definitely drenched, but not uncomfortably so. In addition, my ankles were holding up well, and in spite of having brought ankle braces, I ended up opting to run without them, rationalizing that it was ‘only’ 42k. I only regretted that thought once in the race where I pulled off a pretty painful ankle roll. Good thing I can’t really damage it much more than it already is damaged! 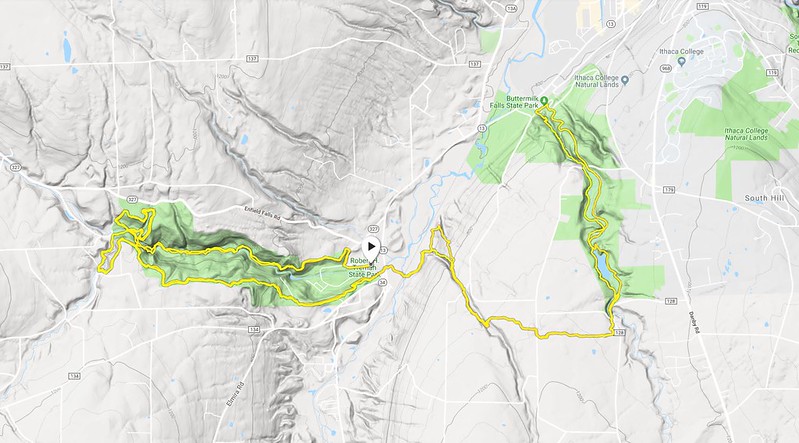 The entire course is sort of a flattened figure 8, and we now had finished the top half of the figure 8, so about ¼ way there. Another aid station, followed by a water crossing and into the hills again. Normally, there is a huge water pit and prizes for the ‘water show’, but levels were so low this year it was more like a splish splash through a creek. Still got the feet wet, but didn’t provide the normal thermal relief of other years. From here was a big climb back up to the top of the cliffs before essentially running along connector trails that link the two state parks that we were running through. I still felt great, and did my best to keep up the pressure on myself. I had a target time of around 5h15min in mind from the outset, but was hoping to better that. In years past, I’ve completed the 80k course in about 10 hours flat, but given my early season issues, I didn’t want to be too optimistic.

At the halfway point of the race, I decided it was time to try and find an extra gear and shoot for a negative split. My energy was good, and my feet were working well. The lack of a pack was also nice, as I was able to dump heat a bit better. At that aid station, I grabbed the ‘secret weapon’ of bacon before heading beside Buttermilk Falls, a beautiful, but very tough long climb on stone stairs back up the canyon walls again. This is not really runnable, but I powered up the stairs pretending I was the last true Stairmaster, passing hikers along the way, and chewing on a peanut butter and jam sandwich in hopes that at the top it would give me that extra bit of oomph I wanted! 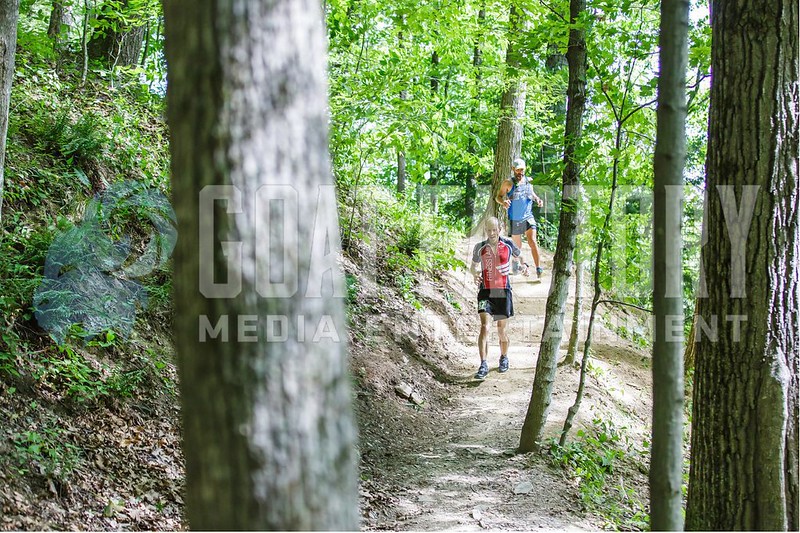 The climb had taken some energy out of me, but I soon found myself regaining steam on the flat section, and was buoyed every time I passed anyone (mostly just hikers) who would cheer me on. My buddy Tim was never far behind (or in front). He would cruise through the aid stations, but I would generally catch back up to him not too much further. I kept the hammer down until we were back at the end of this part of the figure 8, meaning we only had ¼ of the way left to go. At this point, something rather interesting happened to me… I had a shot! I showed up at the aid station, and the volunteers were busy toasting each other with some bourbon, so naturally I asked where’s mine? They were kind enough to oblige, and I soon left the aid station with a burning warmth heading down to my belly.

Tim had obviously kept going through, but now that I had liquid courage, I poured on the jets once again, catching back up and having a good chuckle as I went. At this point, we were also passing folks from the 50 mile course who were still on their 1st lap of the race. We’d come across the winners some time ago, heading the opposite direction (i.e. wrapping up lap 1 of 2), and were now passing the tail enders. I cheered everyone on that I could, and kept pushing. Not much to report at this point, other than I was a man on a mission, and found myself soon enough at the final aid station, a mere 6.6k to the finish. Another quick bottle fill with some caffeinated Nuun, and off I went, hoping to nail this [mostly] downhill final section. There was one final climb, followed by a sustained descent. I figured I was good to cruise in now. 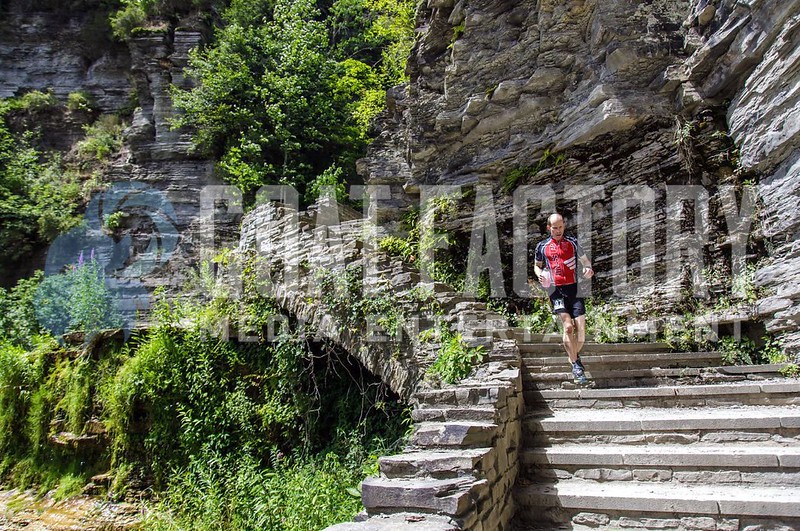 With only a few kilometers to go, the race finally caught up with my legs. Although it wasn’t super hot, I probably hadn’t consumed quite enough electrolytes for my needs. I could feel the beginning twinges of leg cramping. I have gone through this enough to know when I have to be careful and what to do. Any sudden bursts or awkward twists would certainly cause spasming cramps. As a result, I was forced to take about 3-5% of my effort out. I’d finally managed to gap Tim in the last section, and was cruising off the last hill and onto the grassy fields when he finally caught back up to me. I was a bit sad, as I could no longer respond to an acceleration at the finish, so I had to let him take me at the finish, even though I’d led most of the way. No hard feelings though, and we fist-bumped at the finish while I scolded him for being a meanie.

I really wasn’t too upset though, because I crossed the line at 4:36:24, far better than my target, and good enough for a 15th place overall! Not bad for a guy who wasn’t sure if he’d even be racing at all this summer! With the race out of the way, it was time to relax, which was exceedingly easy to do at the finish. I was now going to wait for others to finish, and enjoy the post-race food (tasty pulled pork tacos and fixins!!). In addition, there were a couple kegs of Ithaca Beer Company suds, so I helped myself in the handy-dandy finisher’s stainless steel mug 🙂 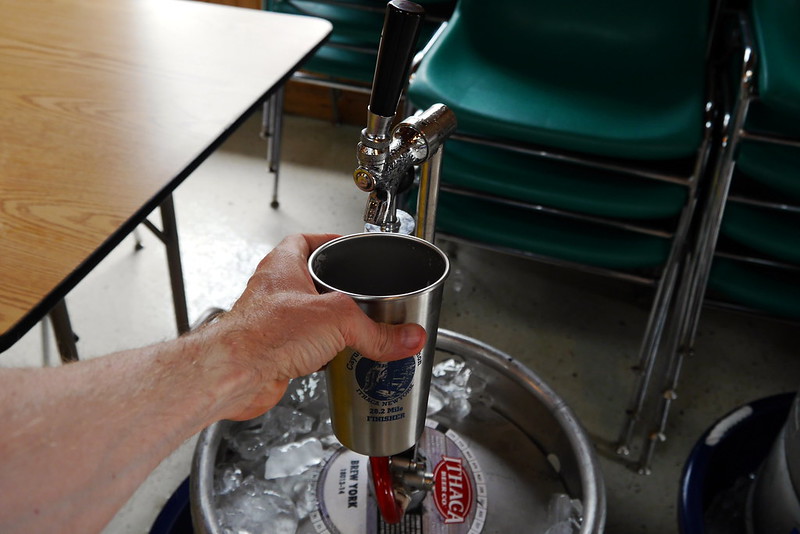 All in all, a fun day down in Ithaca racing, and weekend camping. While I tend to gravitate to the ‘longer’, ‘harder’ races, it was nice to take on a shorter race for a change. I wasn’t completely destroyed at the end, and got to enjoy my day even more, watching racers finish, and just relaxing in the sun. Don’t get me wrong, it was still tough, but seeing as the 50 miler was just two loops of the same course, I was satisfied with having just traversed it once this year! Check out my video below to see how my race unfolded, and the atmosphere of the race. Next up: Canadian Death Race !!!!