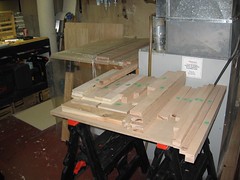 Well, the bar is still coming along, albeit at more of a sloths pace than a gazelle, but what can you do, right? It’s winter, yes, but I’ve still got other things to do. In this picture, you can see most of the rought cut pieces for the bar. Before building, I plan to cut, rout, pre-drill, sand, stain, and varnish most of the wood, so when the time comes to assemble the bar, it’s more like an IKEA project, although much nicer. The little green stickers are the numbers for each piece as per the project plan. If you want to see a few more pictures of where the bar project is at, check out the pictures on flickr. I’ll keep adding more as I go.

Apart from having all the wood cut, I’ve also started tackling the routing. This in itself is proving to be a new challenge, since I’ve never actually used a router. Just to make sure I do an alright job, I snagged a brand new plunge router, as well as a routing table. I’ll say this. After spending 3-4 hours playing with it yesterday, I can safely say there’s no way I would’ve got the project done without those two additions. Now of course, I’m thinking I want a drill press as well. Sheesh. This bar is suddenly getting really expensive! On the plus side, I’ve decided that when I retire, I’ll definitely start doing woodworking much more frequently. Although it can be frustrating at times, I enjoy the precision and the satisfaction of doing something with my own hands. No doubt I’ll tackle a few more projects in the coming years. This bar will be the biggest one in a lone time though I’m sure. There are just so many steps and things I’m learning along the way! Oh well, I guess that’ll make future projects seem that much simpler. 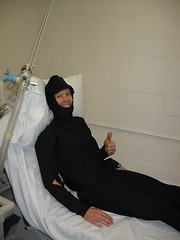 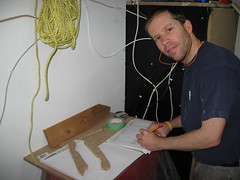 Well, I know I keep talking about this wonderful Oak Bar that I’m building, and that I’ll update this as I go. Well, I’m telling the truth, but it’s taking me longer than I’d like to get rolling on the project. Everytime I start to do some prep work, something else seems to come along and interrupt my momentum. I can say this much for my current status. I have the wood. All the wood now. On Saturday morning, I went out to Adams and Kennedy Wood Source in Manotick to pick up the rest of the Oak wood bits. Man, 2×4 Oak sure is pretty (and costly). They had what I needed, and 9 pieces of wood (and $250) later, I was supposedly ready to go. Instead, I went running. Oh well. The plywood is mostly cut up now as well. What remains is ripping and cross-cutting all the oak planks to the proper dimensions. That will be my next step. I’ve also decided the best way to do this is try and stain and varnish the wood before putting it all together. That should minimize the mess in the living room, and make it easier to finish off. I also have all the odds and ends that I’ll need, like hinges, the sink, shelving, lighting, etc. etc. I really wish it was already done, in time for Christmas, but that is definitely not going to be the case. Rest assured, I’ll survive. But I’ve got to get this done, so I can get back to being lazy in the new rec room! More pics will be posted as I go.