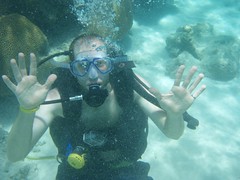 The first thing you’ll note is that I still haven’t gotten around to releasing the re-design for the website that I’ve been tinkering with. As you might have guessed, that’s also due to the PC woes. Hang tight, I’m still working on it, and you’ll see the fruits of my labour soon-ish 😉 Of course, I’ve already spilled the beans on something else that we worked on, which was new kitchen cabinet knobs (poor man’s remodeling), as well as my super-awesome built-in desk that I designed and built for my studio. It’s something I had been toying with for a while, and I’m glad that I finally did it. It’s pretty sweeeet! Now, the more observant of my followers will have also noticed a funny picture accompanying this post. That’s me of course, but not a recent shot. It’s a picture of me when I went scuba diving in Fiji last winter. Why choose that shot? Hmm…

Well, could it be because Jody and I are taking our PADI Open Water certification? Why yes! That’s exactly why. Tee hee. Unfortunately, in taking this course, I’m realizing that it’s something we should have taken a few years ago. After all, we’ve been to numerous great diving spots in the world, and just never had the chance to go diving as we weren’t certified. Well, no more I say! We’ll now be certified, able to rent all the gear we need, and hit the open water either together, or as part of a group, without the need for a divemaster. Plus, we’ll be able to go to the ‘good’ spots, away from the tourists who wreck the dive sites.

There was another motive for signing up to do this course. We will likely have a once-in-a-lifetime diving opportunity over the Christmas holidays, which would warrant having training. Specifically, we hope to be diving the Red Sea! The best part is that we’re looking at diving the Saudi Arabia side of the Red Sea, an area that not many people get to see. It’s reputed to be the best spot to dive in the Red Sea, but due to the nature of that country, most divers never get the chance. So how are we so fortunate? Well, that’s where having family and quasi-political connections comes in to play. As my sister is currently posted there for work, we will have the opportunity to visit the country as guests of not just one, but two embassies. I wil be a guest of the Canadian Embassy, and my non-married spouse will get to be a guest of the New Zealand Embassy of all places!

Along with hopefully doing some Scuba Diving while there, we’re also looking to book an internal trip to visit Mada’in Saleh, a recently-declared Unesco World Heritage site, which is very similar to the better known site of Petra in Jordan. However, once again, this place would get a fraction of the tourists that are known to flock Petra, so I think that would be awesome. Oh, and I’m also personally hoping to check out a camel market, and maybe get me a camel, or some automatic weapons. Whatever the locals do, you know!

On the local traveling front, I also just got back from a weekend bachelor party to celebrate one Dave Smith’s departure from the single lfe. Not that he hasn’t been long gone from that anyway. A group of us headed up to a rustic cabin and lodge type place up at White Lake, which is very near Calabogie / Pakenham. We had an awesome weekend, with plenty of poker, video games, rain, BBQs, some swimming, some simmering sauna action, and even an excellent round of golf. I had a camera with me, but was too pre-occupied with partying to even bother busting it out. I imagine Darcy will have some shots up on Facebook soon, so you’ll see some of the mayhem. There were some rather memorable moments, some of which I wish I hadn’t witnessed, but they’ll not be discussed here to protect the not-so-innocent!

Lastly and leastly, to close off this rapidly growing post, I’ll fill you in on what my Active side has been up to. I’ve of course not been completely delinquent in my training, but the length of my training sessions seem to max out at 2 hours these days. Generally, I’ve been doing some running now, as well as a bunch of biking (usually an hour a day), along with my pool time for the dive course. I’m encouraged with the state of my knee, and will soon see yet another doctor about scheduling a cortisone shot of some description. After that, I plan on working to build my base running back up. However, I’ll keep going to the gym as well this winter, and hopefully lots of biking, snowshoeing and skiing. Carl and I have also officially registered for the BC Bike Race, and I’m really stoked about that. I’ve even booked my plane tickets for that one too. So as you can see, the big ActiveSteve train rolls on, and I’m still on board. Stay tuned for next year’s race developments, as I’m hoping to come back strong. Till next post, take care! 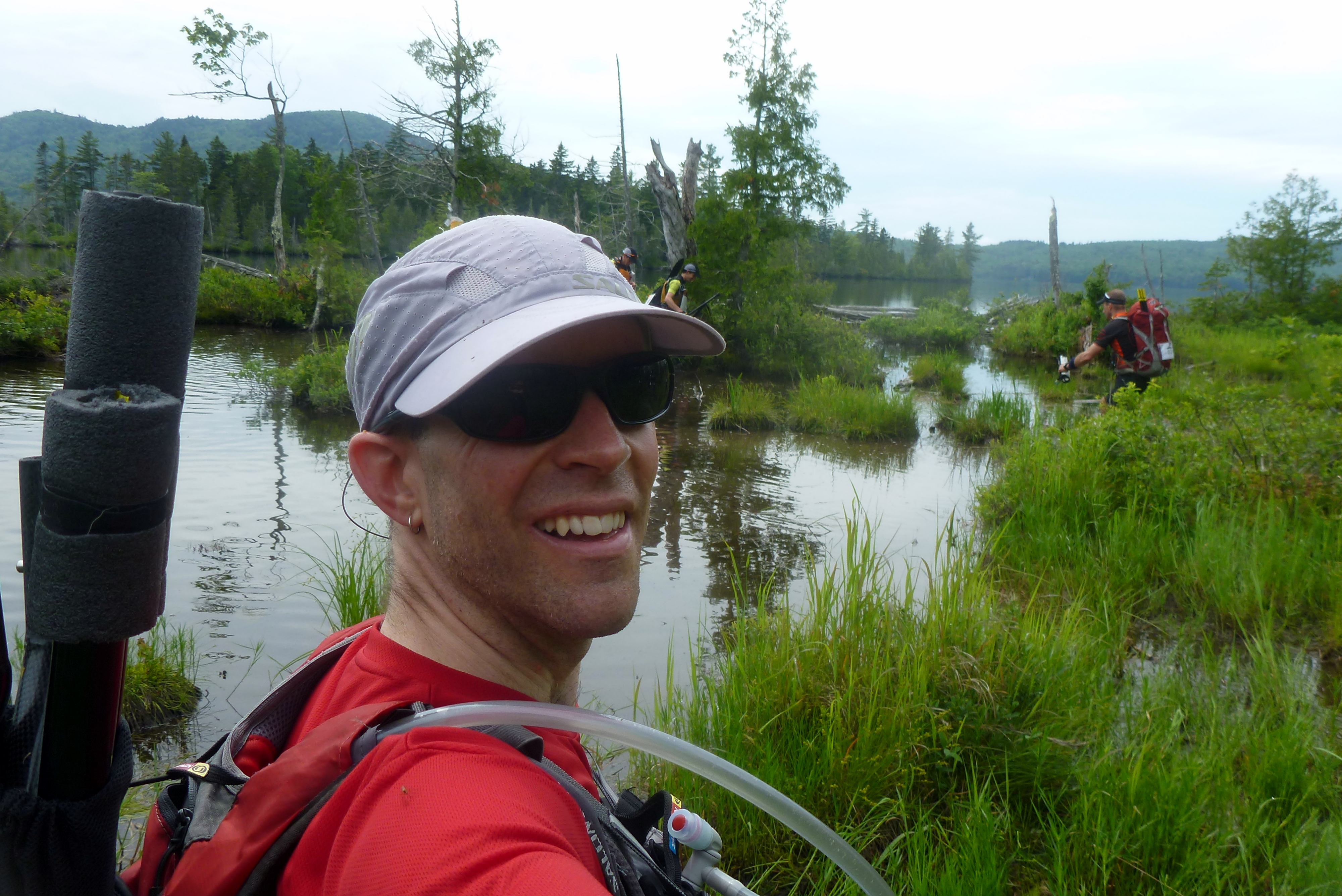 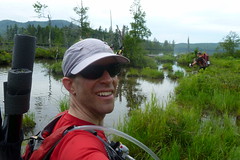 The invitation came exactly 11 days before the big event. I got an innocent-enough sounding message asking if I was interested in joining a U.S. team to race at Untamed New England, a well-known American adventure race. I was immediately interested, but also scared. Untamed is traditionally a multi-day race, and although I’d always wanted to tackle it, I wasn’t sure 11 days was enough prep time! However, this year, the race was actually being run as a 24-hour event instead of multi-day. For that reason, it didn’t take me long to respond in the affirmative that I’d join the roster! I was to be a last-minute replacement for an injured team-mate, and was recruited on James Galipeau’s recommendation (ironically, he was another replacement racer). All I knew was that I’d be racing on THE Untamed New England team (there were 2), and it would be a fast team looking to podium! What follows is the tale of that race, a tale of struggle, suffering, and success. Read on! 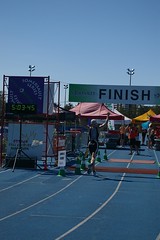 Good day everyone! Well, a week has already passed, and I now realize that I haven’t written up a post about my most recent racing accomplishment. I’m sure by now some of you are getting bored reading all my race stories, but I feel a certain duty to write them up anyway. Think of them all as a snapshot in time for me,ActiveSteve . The most recent race was the Canadian half-iron distance triathlon that I raced here in Ottawa. It’s not the first time I’ve thrown my spandex in the ring for this one, and happily, I can report that I pulled off a personal best. Since that time, the weather has been absolutely magnificent here in the nation’s capital, so I’ve been more focused on being outside biking, running and hiking rather than typing away on my computer in the basement of the house. But without further ado, allow me to fill you in on race day and the results. I’ll try to keep it focused for you all, but no guarantees :-). For starters, you can check out the awesome pictures that Jody snapped of me on the course. You can also, as always, poke around on the race results to see it by the numbers. After your done with those, y’all come back now, and click the read link for more, okay? 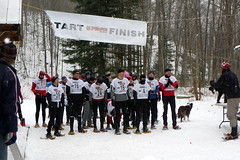 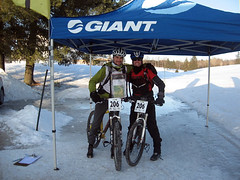 Hey gang, sorry for the delay in posting any new stories to you all. I’ve been pretty wrapped up with the kitchen renovations and work, but fear not, the job is [finally] done, so I can get back to the business of entertaining you all with my fun stories. This will be another tale of a winter race that I took part in a few weeks back. In fact, it was my only Winter Adventure Race of the season, so I was pretty psyched about it. Admittedly, finding motivation to stay on top of my training has become rather tricky, so at a bare minimum, I figured that signing up for the whole snowshoe race series, as well as a winter adventure race would at least keep me in some sort of winter shape, rather than hibernating. To peruse the pictures that were snapped at this race, head over to the appropriate flickr folder, then come on back and read the story. I didn’t have my camera with me, as it was in the shop, but at least there were a couple cameras on course to capture some of the fun. I had my GPS on (with permission), but it somehow got stopped part way through the first section, so the map isn’t very interesting. However, read on for a brief synopsis of my fun race.