So, I just did some quick adding up. Would you believe that since January of this year, up to yesterday night (April 23, 2006), I have run over 820 km? Holy crap! Well, I double checked, and that number is accurate. I’ve put this distance on my own two feet in various shoes over the past 13 weeks. All of this of course is preparation for the marathon, which will be my third time running it. This distance doesn’t include any other things I’ve done, like skiing, snowshoeing, swimming and biking either! I’d like to say I’m a machine, but it really doesn’t feel that way. I’m just a regular guy, who’s been able to be pretty disciplined about getting out there and doing what needs to be done. I’ve got a bit of drive, since I’d like to start coming out with some possible podium finishes in various races that I’ll be doing this summer.

Speaking of which, my schedule is already filling up fast it seems. As of right now, I’m planning to do the marathon, 3 triathlons (including a ½ Ironman), 5 adventure races (hopefully including a ridiculous 1-week, unsupported ‘expedition’ race), 2 trail running races, and playing ultimate Frisbee. Jody isn’t so pleased to hear about new races I’d like to do, since it ultimately means no camping or outings on those weekends. Of course, camping is usually a challenge in itself, what with the Great White Beast, Jonah.

Like any person training hard though, my body does occasionally feel the results. The last couple weeks, I’ve cut back on my ‘extra’ swimming and biking training, since I’m at peak running mileage. I started experiencing various knee and foot pains, but nothing too terrible. Just to be sure, I decided to head out to a sports doctor at PSI Rehab at Scotiabank Place, as well as get a full footwear and orthotics assessment from my friend Ryan at Solefit Orthotics. These appointments are slated for this week and next, so that I can buy new shoes if needed and break them in before the marathon. Anyway, I’m sure this post has limited appeal to most, so I’ll leave it at that. For the record books, yesterday’s weigh-in had me at 129 lbs., 11.3% body fat and 63.1% water composition. Yikes. I better make sure I bulk up before that expedition race! 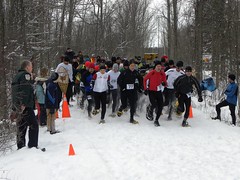 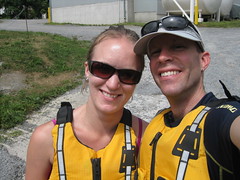 Good day folks! As you can see, the time has been flying by, and I’ve been neglecting my storytelling duties once again for the past little while. I shall now try to rectify that by writing a couple posts to hopefully bring you all up to speed on my summer fun. This post, as well as the next will pull double-duty. Part race-report, and part general updates on my summer :-). For this post, I’ll focus on the recent 5Peaks trail running race I did, and the few weeks leading up to it.
In those weeks, I had fun at Taste the Danforth in Toronto, camping in Prince Edward County, and catching the International Fireworks competition in Gatineau. Read on for all the details. I’ll start with the race, which I sadly have no pictures for a change. However, there are pictures of some of the other fun, especially since I bought a new camera! 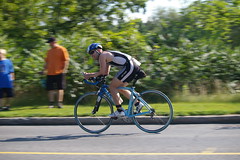 Welcome to another installment of race reports over here at ActiveSteve.com. This story will feature another exciting tale about me trying my best to climb up a podium in a local triathlon. Don’t bother holding your breath, I didn’t make it up to the top step this time either, but I did have a great race, and felt pretty good about it. Remember, I’m doing it for fun, I don’t get paid, or get any type of perks no matter how well I do 🙂 So which race was it? Well, the 2009 National Capital Olympic Triathlon. Like the last race, it would be a 1.5km swim, followed by a 40km bike, capped off with a 10km run. Easy peasy, right? I’d actually raced this particular race in both 2005 and 2006. I raced it in 2007 as well, but that was in the Kayak tri category. The good news is that I managed to best my previous times, which keeps me motivated. For the full story, read on, but before you do so, why not check out the pics that my beautiful race photographer (Jody) took of me on the course. 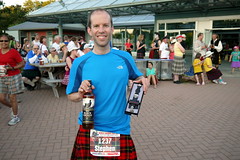 G’day friends and fellow competitors. I’m here to tell you all the tale of my race at the Perth Kilt Run held last weekend. This is a Guinness World Records-setting event that I’ve been interested in trying out since it’s inception a few years back. It was the third annual, and located close enough to home that Deanna and I both wanted to take part. It also gave us a chance to do a little motorbike tour, and hit Merrickville and Smith’s Falls. I was also onsite to cover the event for Get Out There Magazine, and accordingly, put together my standard video race review. While wandering around and taking the sights in, I also managed to snap a few pictures to commemorate the day. While the Kilt Run is mainly a 5-mile road race, they also had a separate event called the Warrior Class division, which is what I registered myself in. For full details on the race and how I did, read on!