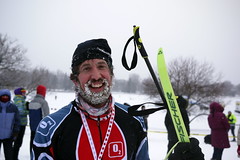 So, let’s get to the heart of this race. For starters, it isn’t terribly long or overly taxing. Now, of course, if you’re going max effort, even a 1k (or 100m for that matter) race is taxing. What I mean is that this type of event has wide appeal and is accessible pretty much to all. It happens in downtown Ottawa starting at Dow’s lake, and races along the canal for the skate, through the arboretum for the ski, and along the parkway for the run. In terms of distance, we are told about 8k skate, 6-8k ski (in 2 loops), and a 5k run. This of course all depends on what the weather dictates. For this year, a heavy thaw, snow, and re-freeze cycle had us guessing if there would even be a skate in the days leading up to the race!

Lucky for us, the event went off with all 3 events. However, the order was juggled. Normally it is skate, ski, and run, allowing us to wear ski boots for the first 2 events, and change footwear once. However, due to changing the run course (and presumably impacting road closure options), it was shifted to a skate, run, ski. This of course meant changing footwear twice. Luckily, I’d done the same thing the week before at Frost and Fire, so had learned a couple tricks. Most important being having the ski boots properly set up to get done up when you have limited feeling in your fingers (which is almost always the case on a winter day when it’s 8am and -20 out!!). However, apart from that little change, everything was set to go. 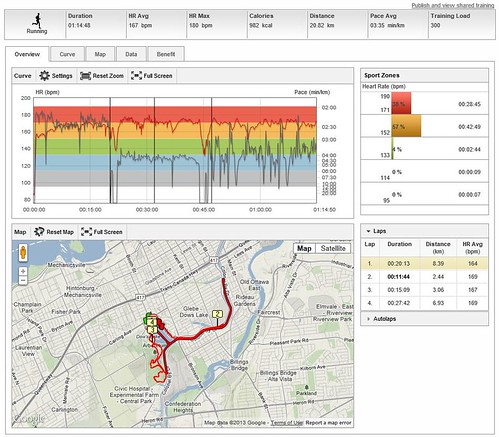 The real challenge for me was going to be racing with the leaders here. I have gone skating a grand total of once (1) this year leading up to this race, and my skate skiing is still sub-par. In my mind, I still had hopes of staying with the lead pack on the skate, getting in a solid run, and holding on in the ski. Well, dreams be dashed! I held on for the first 1k or so on the skate, then gradually drifted off the lead pack after the first hairpin turn. Regardless, I pushed hard, and stayed with a smaller chase group, and had a respectable skate time of just under 22mins. No results given, but I’m guessing it was in the top 30 or so of 277. The ice was generally in good condition, and I have no excuses other than my own lack of technique and skate fitness 🙂

Next up was the run. I had a pretty quick transition thanks to my speed laces (elastic laces used for triathlon that let you just slip on your shoes). Grabbed my second camera (I wore one on my head the whole way, and carried a second one on the fun on a QuickPod), and jogged out of transition. I took it easy the first couple hundred meters, doing some filming and getting my legs used to running. Once I felt ready, I gradually turned the power up and got my cadence up higher. I started passing a bunch of people, and felt quite strong. I was only improving my spot in the race, and reckon I moved up maybe 8 spots. I had a bad stitch at one point, but was able to run it out and not lose any more spots. I think I was only passed by 1 or 2 the whole way, so I was happy with my 21 minute 5k time at -20 carrying 2 cameras and filming 🙂

Back into the transition zone to start what I was dreading most… the ski. I was of course skate skiing, as even if I was not a great skate skier, it would still be faster than classic. Due to the cold temperatures combined with the fresh snow, conditions were pretty slow. Even I noticed the sand-like or icing-sugar like snow conditions. I suspect my lighter weight made it slightly easier going for me, but it was still a tough two loops. I didn’t think I was passed by too many people, but it looks like timewise, I was probably out of the top 40 on the ski. Ultimately, this lead to a final placing of 37th of 277, and 11th of 48 in my category. Not great, but not bad. after all, I knew I was out of my league, and just out for a great day of exercise celebrating winter in our Nation’s Capital.

Whereas the run was a very simple out and back along the parkway, the ski took us on a fun twisting and turning romp through the arboretum with little climbs and hills to zoom down. They had done a good job grooming for the conditions, and I managed to avoid too many traffic jams on my second loop by politely skiing around the slower folks. On the plus side, it looked like most people were having a ball out there. That is, except for the poor fellow who had been chasing me down, and would have kicked my butt on the ski if he hadn’t snapped a pole on the pursuit. He skied in very shortly after me, to my shock (as I knew he was a much faster skier), then held the broken shaft aloft and cried “I nearly had you!!”. All in the name of fun folks.

Once the racing was over, there was some time to mill around and chat with people, but given the cold temperatures, most racers didn’t hang around too long. If you were a racer, however, there were some warm beverage options at the finish in the form of warm chicken soup or warm hot chocolate, which did help somewhat. As for me, I stuck around a little longer in order to get some race footage of people coming in, as well as to have a few words with Rick, the race director. The reason of course was to get what I needed in order to finish my race review. If you haven’t seen it, it’s embedded below, and should give you a good idea of the over-all race. With this one out of the way, it is now time to tackle my two biggest winter events: the Canadian Ski Marathon, and the Gatineau Loppet. Stay tuned for those reports next! 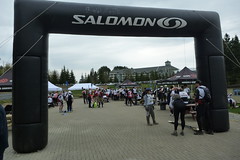 Howdy race fans! Time to update you on my first adventure race of the 2010 season. The race in question? The Frontier Adventure Challenge 5-8 hour race held at Deerhurst Resort in the Muskoka region. Yes, the very same resort hosting the upcoming G8/G20 summit in June. And yes, it actually did have an impact on the race and the venue, which I’ll fill you all in on in the coming paragraphs. Although this was supposed to be a ‘short and sweet’ race, you’ll soon find out that my race was anything but. It was longish, and bitter-sweet. I did manage to complete the whole course, including the advanced section, but my placement was deep-sixed by a navigational error of my own doing. That’s what I get for racing solo to really push myself I guess :-(. At any rate, I’ve got a few pictures from the weekend, but no map to share. Bill Young has some great race shots that he took and shared on Facebook as well. If you want the whole funny tale about my race, please read on. I’ll *try* to be succinct. 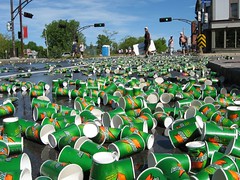 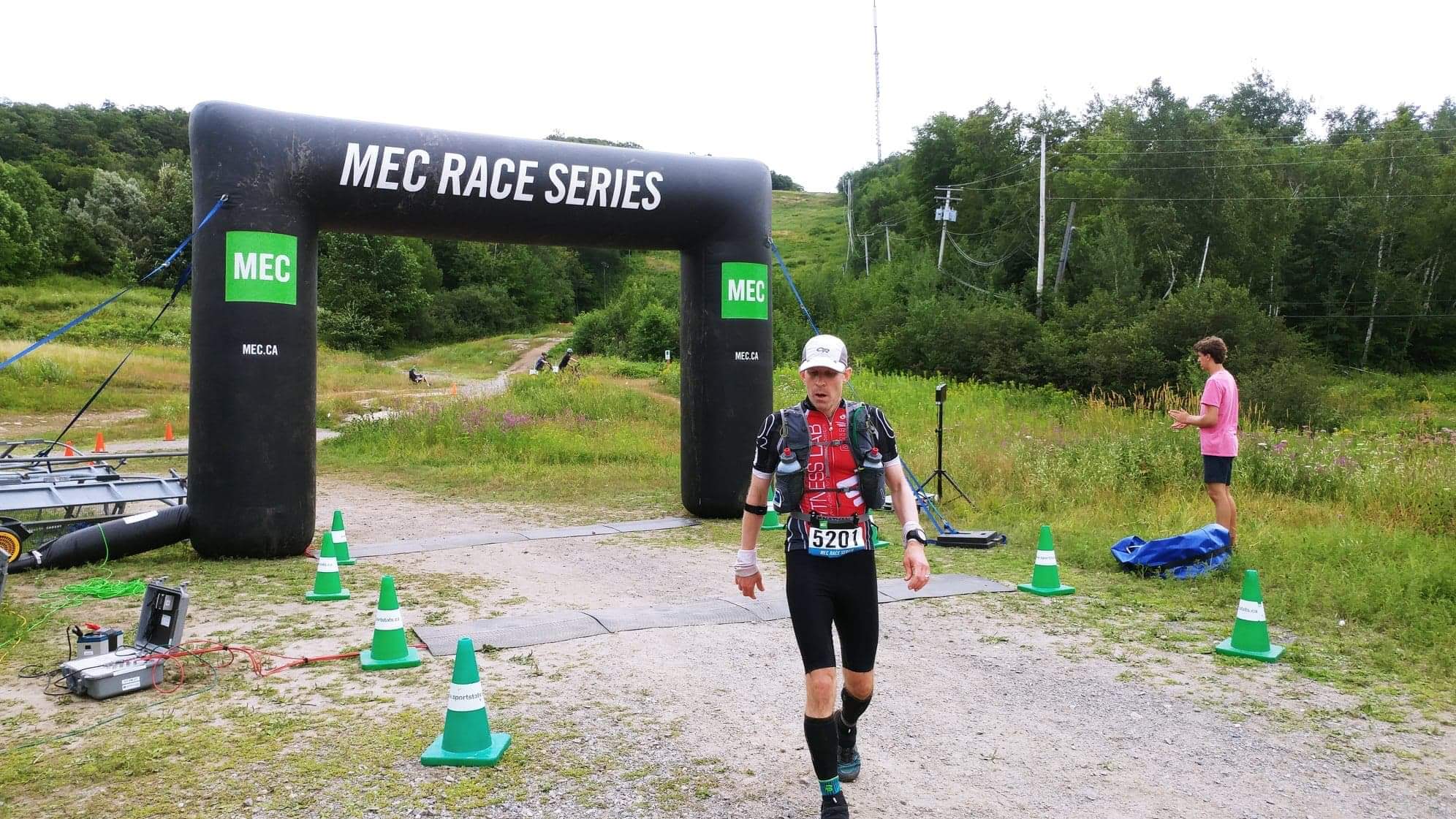 As a result of my late November ankle surgery, part of my plan for the 2019 race season was to play it […] 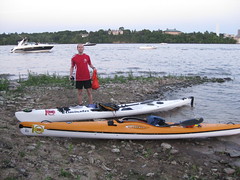 Canada’s birthday has come and gone once again, and I hope that you all had a great day off to celebrate the birth of this great nation that we live in. Deanna and I started the day off fairly lazily, with a nice breakfast and some chores around the house. A week later, we’d be leaving on our Atlantic Canada tour, where we’d actually be visiting the birthplace of Confederation. However, first up was a nice long weekend of relaxing fun in the Ottawa area. Rather than battling the big crowds downtown as we’d done last year, we had hatched a plan to take our kayaks out on the water and do some paddling, including some geocaching along the Ottawa river and a picnic out there, capped with fireworks. We managed to snap a few picures during the day, which you can check out here. After you had a look a those, pop on back for a bit more about our day. I promise that I won’t be too verbose with this post!