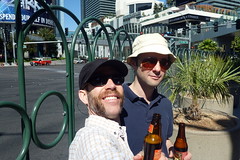 Some of the ‘Shareable’ Pics

There are some advantages to getting married a little later in life. The bachelor party options are probably one of those. Given everyone’s status in life, people tend to be a little more comfortable in spending a bit of money to head out of town. Although I would have been completely happy to stay in town and have a single crazy night, the consensus from the guys was that they wanted to leave town. With growing families and responsibilities, everyone seemed quite keen to just get away for a few days. Our original thought had been either Austin or New Orleans, but after some digging and pricing, we decided Vegas was probably the easiest solution. It also helped that one of our good buddies from years gone by lives there now!

Once the venue was selected, we did our best to get as many people onboard as we could. In the end, there were 9 of us, and I can assure you that things would have only gotten more complicated with more than that. Even at 9 people, there was a lot of ‘kitten herding’ going on. After all, everyone was at different levels of sobriety and had different ideas of what we should be doing at any given time. Eating, gambling, hanging poolside, drinking, catching a show, or just wandering the strip aimlessly were all viable options 24/7 while down there!

Ironically, much like a race, just getting there proved to be a bit of a challenge for some. Ontario was hit by a very late-season snowstorm, which looked like it may wreak havoc on some of the flight routings through Toronto. Three of us were booked on a 9am direct flight from Ottawa, which was not impacted at all. We also convinced Kev to re-book his afternoon flight (which was supposed to go through Toronto) to join us, just to be safe. 2 others were already in town for a conference / poker tournament, and of course Troy lives in Vegas. That left only my best man Matt, and Dave. Matt made it unscathed on Thursday night late. Sadly, poor Dave spent a VERY long day Friday making his way to join us! Luckily he made up for it by partying hard on Saturday 😉

As far as activities go, we had no real plan going into the weekend. As you can imagine, most of the time was spent just wandering around, hitting some casinos, enjoying bad food and tasty drinks. Probably the best part of the whole weekend was the fact that we were able to both start and end the weekend away from the madness of the strip at our buddy Troy’s house. There, he has a great pool and hot tub in his backyard, the perfect place to relax with a beer in hand and enjoy the warm southern sun. And boy, was it sunny! We had 4 days of perfect weather. Sunny skies and temperatures between 24 and 30 degrees Celsius. I had great intentions of running every day, but ended up only making it out once for a run and to hit the gym. An extended bachelor party simply isn’t conducive to training! Kev can further attest to this.

As far as lodgings on the strip, we split into two different resorts. We had a giant suite at the Elara (behind Planet Hollywood), which was perfect for congregating. We also had a room booked at the MGM Grand, so that we’d have access to the amazing pool there. We spent two of our afternoons just hanging out by the lazy river and watching the world go by as a group. It was awesome. We also managed a couple good meals out as a group too. Once to the fun Hofbrauhaus Las Vegas, where it’s Oktoberfest all year! That same night, we also made it to the Double Down Saloon, a place I’ve always wanted to check out. Another night, we headed out for a carnivore’s delight at the Samba Brazilian Steakhouse at the Mirage. All the meat you can eat, served non-stop on giant skewers! Awesome!

I’d like to thank all the guys once again for making it out to Vegas with me to celebrate the end of my ‘bachelor life’. As Deanna knows, I have no reservations about this life change! Truth be told, I’m pretty sure I’ve been bachelor’d out for quite some time, but who doesn’t like an excuse to party with no regrets for 4 days? I kept up my end of the bargain by having a beer in hand pretty much the moment we landed (headed straight to airport bar), to the moment we left (I had a beer in a paper cup at the gate while waiting to board!). However, I’m also happy to report that thanks to our collective ‘maturity’ I was never forced to endure embarrassing bachelor party traditions, but instead just encouraged to have a good time. That’s not to say I didn’t sleep with 1 eye open just in case though! And of course, thanks for the good memories that I’ll keep to myself for years to come 😉 I definitely have the best friends in the world, and consider them all part of my family.

With that out of the way, it’s time to focus on the race season now. The season officially starts this coming weekend, May 5th, in Huntsville, at the 8 hour Frontier Adventure Challenge, which I’ll be racing solo and reporting on. Let the fun continue… 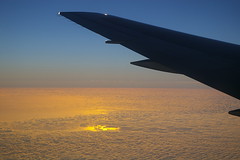 Click here for pics from the last 2 days in Buenos Aires and the flight home. Arrgh! Although I should be happy that we arrived back in Canada safe and sound, I can’t help but feel a little sad that I’m no longer living the life of a rich man in Argentina. The flights back were pretty routine. The only real snafu was Jody sadly lost the pendant on a nice necklace that she picked up while we were down there. It was a sad moment. The trip took us about 15 hours of total flying time, and a combined 2 hours of lay-overs in Santiago and Toronto. I used my last pesos to buy a couple beers and waters in Buenos Aires. I ended up spending all but about $5 US of all the money I had converted. 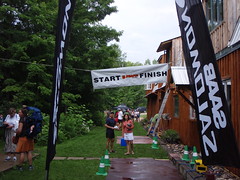 Hey gang! I sincerely hope that everyone’s summer is going swimmingly. Mine, despite the minor setbacks related to not being allowed to run, has been fun so far. Even though I’m frustrated with the lack of running, I can definitely take solace in the fact that I do indeed still have my health. As such, I’m still embracing activity and getting out when I can to do interesting things. Such has been the case yet again for the past couple weekends, where I once again threw my hat in the ring as a volunteer to help out at local races. I’ll put up two separate posts for you to all digest, and this first one is about the 5 Peaks Trail Run that took place near Farrellton, Quebec. If you’re interested in seeing some pictures from the event, head on over to the folder I put up on Flickr. For fun, I also decided to bike back from the event for a little extra training, and since I haven’t put up a map in a while for all you keeners, you can check that out as well. When you’re done, come on back and read my short tale about the day. Oh yeah, and as a bonus, I have a pseudo update on my knee first. 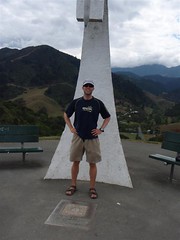 26/01/08
Hey Gang! Well, this post has no accompanying map to go with it. Let me just get that out of the way right now. My apologies, I just decided that I didn’t need to drag around my GPS all day today. At one point, I thought that it might have been a good idea, but by then it was too late. So there you have it. Either way, I had a pretty good day today, even though I didn’t stray too far from Nelson itself. That’s okay though, as there is plenty to see in the immediate region anyway! I took a bunch of pictures, but they may not be up at the same time as this post, so you might have to wait. Sorry. Hee hee. Anyway, read on for a little story about my day here in sunny Nelson. 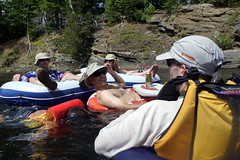