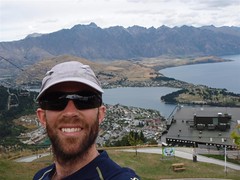 My day started out with the best intentions. For starters, I slept in until 8:20am, and didn’t shower right away. Instead, I started uploading pictures to Flickr, and then made some phone calls back home to check in and let people know how I was doing, although there isn’t much doubt how things are on my end, since the blog pretty much tells the whole story. I contemplated putting a movie in to watch, but I find it too distracting if I’m working on the computer. So instead, I just cranked away on the computer. Well, that and I spent quite a bit of time using Skype Video to chat with Jody. It’s always nice to see her face whenever it’s possible, which isn’t all that often given the state of the Internet around here 🙂

Eventually, hunger and my desire to get my adventure activities booked got the better of me, and I grabbed a shower while doing my laundry. Once that was hung to dry, I trudged down ‘death hill’ to downtown to grab a bite and look into my money-related activities. In no time flat, I had spent about 700 NZD!!! Can you believe it? Well, I booked the AJ Hackett ‘Thrillogy’ of 3 bungy jumps, then Skippers Canyon Jet boat ride, and finally the Shotover Canyon Swing. I had to book it all at once in order to plan out the timing of all the events over the next couple days. As it stood, I had to start right away, and within an hour, I was due up at the top of the Skyline Godola for the Ledge Bungy jump! Fair enough. The less time I spend thinking about it, probably the better. So off I went, up a very cool gondola ride to some amazing views of Lake Wakatipu and the surrounding mountains. It was a bit overcast, but still relatively clear views, so I was suitably impressed.

Now, I’ve got to tell you, I thought this bungy thing would be a piece of cake for me. Well, it wasn’t. Not by a stretch. Even getting harnessed up and everything, I had no apprehension whatsoever. I felt completely safe and sound. However, then it came time to actually step up and jump off a ledge situated 400m above Queenstown to fall 43m while held by a bungy cord. Sounds easy, doesn’t it? Well, the problem is that everything in your body rejects the notion that it should head directly towards rocks and trees below a perfectly fine wooden platform. I had decided to try a fancy jump called the flying squirrel, which is where you run fast and jump off, grabbing your ankles as you jump, and eventually just let your arms go straight. That’s where things went wrong for me.

The instant before my feet left the ground, I sort of freaked out in my head. Rather than gracefully grab my ankles, I went out with all my limbs flailing and cursing. In my gyrations, I somehow managed to, get this, get the cord between my legs. When I reached the end of the cord… well, lets just say the bungy experience was severely impacted when my twig and berries were violently crushed by tightening bungy cords. I was in mortal pain dangling at the end of the cord. Not a good first jump. Thank goodness I have two more to perfect my craft. Once up top, the guys said they cringed when they saw what was about to happen. It took a good long time to walk off that one, let me tell you. I made a pit stop to make sure everything was still attached, which it was. Whew.

While still at top of the mountain, I decided to try my hat at some luge runs as well, which I must say were super-fun. I ended up sweet-talking my way into getting three luge runs for the price of two, as the girl working the ticket booth was a fellow Ontarian, so I convinced her she should give me an extra free run. After all, they force you to take the beginner run before you get to try the advanced course, and I really just wanted to do the advanced run twice. The carts you use are very easy to use. You pull back to go, and pull back even more to apply the breaks, and just turn the handle left and right for turns. It’s really not a luge you might be thinking of, but more of a cross between a toboggan and a go-kart with no motor. Just check out the pics to get the idea. Happily, this event was pain-free, and was a really fun way to zip around at the top of the mountain. There was a separate, free chairlift just for that.

Once I’d had enough of the mountain top, I headed back down, and returned to home base, where Julia and Mark were arriving back from work shortly. We had some delicious Alfredo prepared by Mark, before Julia was headed off to play some pick-up Ultimate. Mark and I joined to watch with a couple beers, rather than play ourselves. My legs were still in no shape to run, not to mention the lingering pain in my nether regions from the infamous bungy experience. We stayed out there till it was dark, then returned to watch an Ottawa Senators – Boston Bruins game that was recorded and sent to Julia by her dad. Sadly, the Bruins won by a score of 4-1. Boo. Either way, it was a great day for me, with plenty of pseudo-rest to help me recover. In a couple days, I’ll be trying to do a 4-5 day hike in 2 days. So, enough for this post, I’ve got another one to write! Then I’ll be caught up. Sadly, it probably won’t be written until another day has gone by! 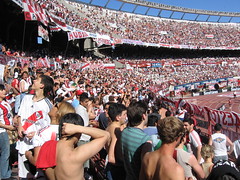 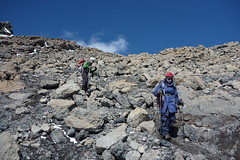 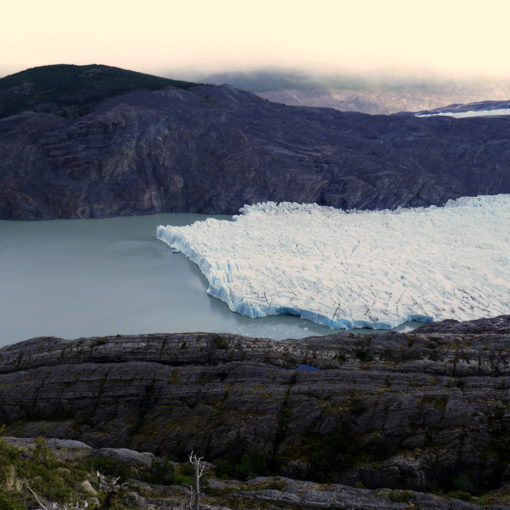 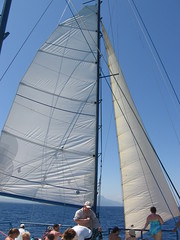 My final excursion while in the Dominican Republic was a full day Catamaran excursion. Possibly the best part about this excursion was the fact that it departed from my resort’s beach, so I really didn’t have to displace myself too much in order to make it there on time at 8am. This was a good thing, because I was a little bit worn out from the Tuesday night activities. What were those activities you ask? Well, that was the night I met up with Penelope and Melissa at the beachside grill a la carte restaurant, after which I went to the casino night with Go Travel direct. That turned out to be pretty lame, so I ended up going back to the resort for the nightly show, which ended up being the light-bulb eating dude! That was a good call, and put me in the mood to have a few drinks while I watched. Anyway, long story short, I was definitely ready to hit the ocean the next morning, but not in the mood to join the ‘party’ aspect of the day. Yup, as might be expected, this was no ordinary catamaran. This was the party catamaran! Open bar all day long. However, I didn’t touch a drop till we were actually anchored back at our starting point late in the afternoon. I just couldn’t justify drinking all day. That and the fact that I didn’t know a single soul on the boat, since none of the people I’d met were on this excursion. However, it was still pretty cool. Read on for more.