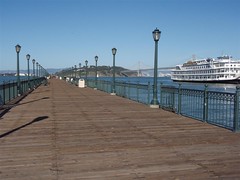 Upon landing, my first order of business was to figure out exactly what to do with my bike box and heavy duffel bag. There was no way I’d be lugging those downtown with me. The process for that dilemma involved what felt like kilometers of walking through the terminals, which wasn’t fun with the heavy stuff in tow. I tried to get Air Canada to check it for me, seeing as I was under 24 hours from my flight, but no dice. That was a long wasted trip. I ended up having to pay 37USD to have them securely stored for a 24 hour period. Not the end of the world, and certainly better than keeping them with me.

Once the bags were stashed, I grabbed the BART train bound for downtown. For a mere 10.70, I got a round trip to a station only a couple blocks from the hostel. Of course, figuring out that it was 10.70, and how to actually get there and pay proved a bit of a challenge with the very surly person working in the transit booth. Very condescending. Oh well, welcome to big city USA I guess. No more friendly kiwis going out of their way to help you down here. Regardless, I’m a big boy, and I was soon being whisked to Powell Station, close to Union Square. I was pretty beat. Got to the hostel, and checked myself in. At least it was only costing me about 24USD to sleep 3 blocks from Union Square. not too shabby. I was in a 4-share room in a back corner on the 3rd floor. I made my bed, and decided to lay down for a 40 minute power nap which turned into about 25 minutes by the time I actually fell asleep. Better than nothing, it left me refreshed enough to do a bit of light touring.

I left the hostel, and just started walking around, taking in the sights, smells and sounds of San Fran on foot, armed with just a little map and my camera. My overall impressions were quite good. Felt like a safer city than a lot of other large US cities, in spite of the fact that there was always a siren blazing somewhere nearby, and plenty of homeless wandering the streets. However, it was generally clean, with only some grafitti. I only made it to Union Square, China Town, the Financial district, and the waterfront by the Bay Bridge. The city was bigger than I thought for walking it, and in my tired state, I just didn’t feel like hoofing if all the way to the Golden Gate bridge and Alcatraz. I’m sure I’ll be back sometime, and I’ll have to spend more than a single night there. Luckily, I’d also get the chance to check out the local nightlife a little bit anyway, as the hostel organizes a pub crawl on Thursday night, which I figured I’d jump on. I grabbed a traditional American supper at MacDonalds, and headed back to the hostel.

There was free wirless at the hostel, so I thought I’d jump online and do a few things in the lobby, also giving me a chance to meet people possibly heading out that night. Well, the wireless connectiviity was spotty at best, but I did meet people in no time. Ironically, I ended up meeting a few different Kiwis of all things. I hit it off quite well with a guy by the name of Mark who was globetrotting to do snowboarding and work a bit, but is also keen on Adventure racing, and knew some of the same people I knew in the sport. We eneded up chatting for quite some time, and that spilled over into the pub crawl, where we both drank some bevvies and just kept chatting with each other as well as other people we met along the way. He was catching a 1am bus to Tahoe, so he was leaving a bit earlier from the crawl than I, but I didn’t stay out too much later myself. I was back and in bed shortly after midnight.

The crawl itself was okay. The bars we visited each gave us drink specials like 2.50 pints of Stella! However, these were all pretty much small places, and once our crew of about 25 descended on each bar, we made up the majority, so it was more like a moving private party rather than a chance to see the real San Fran nightlife. Too bad about that, but it was still a good time. I was happy enough to pack it in relatively early to get some sleep before the last leg of the trip back home. The nice part of a west coast stopover is that it lets me reset my internal clock, and I figure that by the time I land back in Ottawa, I should be pretty much accustomed to the time zone changes.

Well, that pretty much wraps up my slightly less than 24 hours in San Fran. In the morning, I had a great diner breakfast, which I must say was the one thing lacking in NZ. I had an egg, great hash browns, crispy bacon, and a short stack of pancakes for 4USD. Delivious, and just what the doctor ordered before heading back to the airport, which I’m currently sitting in typing this up with my extra time. Air Canada for the return journey dinged me 35USD for overweight bags, and another 50USD for the bike. Oh well, that’s still 10USD less than what I thought I might pay, and at this point, I just want to get home. I didn’t necessarily want to leave NZ or end the trip, but once you’re actually in the travel process, you can’t wait to get it over with. Just two more flights and about 10-11 hours, and I’ll be home! Whew. See you all real soon… 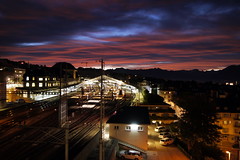 Hello friends! As you all know well, I’m somewhat of a fan of taking part in races whenever I get the chance. Well, as it turns out, that apparently also extends to when I take some vacation time! This post will cover both the vacation that Deanna and I recently took in Switzerland (3 weeks!) as well as the half marathon that we both race in while there. Some of you may not realize this, but I am lucky enough to have dual citizenship. Canadian, and Swiss. I still have quite a bit of family over there, and it’s been a long time since I visited. Add to that the fact that Deanna has never been over there, and you can quickly see why this ended up being the perfect place for us to take a nice vacation. As you can well imagine, we took a ton of pictures, which you can all view in the collection that I put up on flickr. Eventually, I’ll pull together a ‘best of’ set, but for now, you can have a look at the whole lot of them. Read on for some of the highlights of the trip. 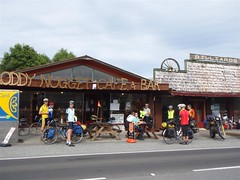 Hey gang. Just thought I’d make a quick blog post to let you know that I’m alive and well, but sadly, the blog posts haven’t been uploaded. On the plus side, you can check out the hundreds of photos that I’ve managed to upload while in Queenstown.

Rest assured, I’ve already got 4 posts and 4 maps set to go, but it’ll have to wait. At the moment, I’m in Glenorchy with just my day pack, about to do a 3-4 day tramping track called the Rees-Dart, along with the Cascade Saddle. Normally, they say it takes 4-5 for just Rees-Dart, but my plan is to do the main track in 2 days, and tack on an extra day to do a high alpine pass called the Cascade Saddle.

As you might guess, I have no computer here. When I was trying to upload the latest posts and maps, there was a problem with my server provider’s facilities, so the site was down periodically. Hopefully that’s straightened out, and when I get back to Queenstown, I’ll get the posts up, and maybe have another one for you to enjoy. Till then, enjoy all the pics! 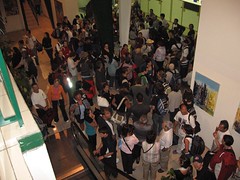 As I alluded to in a previous post, Jody and I ran into a few snags on our way home from Cuba over the Christmas Holidays. Namely, we got stuck in Cuba an extra day due to mechanical problems with our Zoom Airlines plane. The picture you see here is at around midnight, when we were told to go back down through customs. Why is everyone standing there you ask? Well, the authorities had no idea why we were sent there, and we all had to go back up to where I was and around the airport another way to get to the baggage. Just one of the ‘little’ snags in this dismal experience. In any case, we’ve sort of waited for almost a month, hoping to receive some sort of explanation or apology for all the problems. However, there was no word from either Zoom or Go Travel Direct. As a result, we ended up writing a strongly worded letter outlining all the shortcomings, and sent it in to their customer relations departments. Now we just need to wait and see what they have to say. We’ll keep you posted. In the meantime, read on to see the full text of the letter we sent.