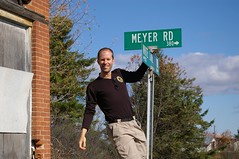 Since we had no Friday plans, we were given the last-minute chance to drive out to Arnprior to share in some wine and cheese with Darcy, Anika, Jim and Allison, but Jody had gotten up rather early in the day, i.e. 4:30am, so we instead opted to just stay home and catch up on some TV that we’d PVR’d over the week. After Jody fell asleep, I took the chance to get back to work on my computer work. Yup, still getting my recording studio re-setup, as well as still working on the website redesign. I’m really close, I swear. Darcy popped by, as I was trying to return a bike box to Jim, but it didn’ fit in his trunk, which forced me to make the decision to drive out to Arnprior on Saturday. Why not, right? So came the decision to go for a Sunday drive on Saturday.

Getting up on Saturday morning, I asked Jody if she’d like to go for breakfast in Arnprior. The idea was to go for a quick spin out there, then meander our way back through the back roads, eventually leading us back through to Kanata Dive Supply, where I had essentially made up my mind to buy a[nother] wetsuit. Once out in Arnprior, we headed to the Antrim Truck Stop for breakfast. It’s generally my go-to place when I’m out that way. The food isn’t the cheapest, but where else can you dine with a big rig in the foyer? Dropping off the bike box, the main reason for the trip, was a no-brainer, as Jim and Alli weren’t home, so I just left it at their house.

After eating, we just wandered along the country roads, when to my surprise I found Meyer road. How awesome is that? Of course I had to stop to take my picture there, and then drive it’s entire length. I was hoping I might spot some perfect property along it, but such was just not the case. There is a little stream there, but generally, it’s just farmer’s fields sort of a drive. Next stop was Pakenham, where there is 5-span stone bridge, which is the only one of its kind in the North American continent. Betcha didn’t know that! We drove to the foot of Mount Pakenham as well, but there was little reason to hike up it. The leaves have basically all changed already, so we were faced with the prospect of just looking at bare branches.

After Pakenham, we just drove along to Kanata in order for me to by my wetsuit. Yes, I already have 2 of them, but one is dedicated to Triathlons, and the other is just a farmer John I use for chilly day paddles. If I’m planning to do any real Scuba diving around here, it made sense to buy another one. As a recent grad from KDS, I was entitled to a discount as well. In the end, I bought a 2 piece 7m cold water suit. That’s a full 7mm suit, coupled with a 7mm ‘tunic’ with attached hood. Now I’m pretty much set to go diving anywhere in the world, at pretty much any time of the year. Sweet. I got a really good deal too, since this suit had been extra stock that they had for a while. On the plus side, the suit is made in Canada, and I bought it locally at a family owned business. So there you go, just doing my part for the Canadian economy as well. Aren’t I swell 🙂 ?

Once home, I decided it would be a great idea to squeeze in a good run as well, since I’ve recently taken up running in a more serious way again lately. I didn’t plan out a route specifically, but rather, just decided to hit the pavement and run while it felt good. In the end, I meandered around our neck of the woods and did about 17km of running. As a bonus, I made my run take me to Al and Matt’s house, where I woke up a sleepy, hungover Matt to chat for a bit. I’d passed two different bars advertising Oktoberfest parties that night, so I was keen to see if he might like to join. Long story short, he declined, which meant another low key evening. Jody and I watched the Horror / Musical movie starring Johnny Depp: Sweeney Todd, the Demon Barber of Fleet Street. Not bad, as long as you’re okay with it being 70% music.

Sunday was a resting-type day, although I did spend a fairly large part of my day doing winterizing type activities. Raking leaves, bagging them, mowing, cleaning out the shed, and so on. Not a bad weekend overall, and my third in a row which was pretty toned down. I’m starting to get the itch for a soiree, if you get my drift…. till then, see ya round. 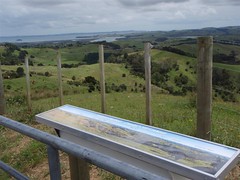 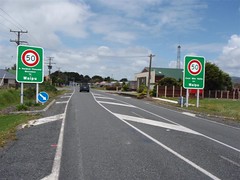 Hi folks. I see you’re all back to read the next installment in my ongoing saga in New Zealand. Thanks. I’m happy to provide everyone with glimpses into my psyche and what I’m doing, why, and what it all means to me. This installment sees me biking from the Little Earth Hostel in Whangarei to the coastal town of Mangawhai Heads and the Coastal Cows Hostel. First thing I did before leaving this morning was to check whether or not the hostel would have room, so that I’d know whether or not I’d have to keep moving. Huzzah, they had room, so now I didn’t have to rush to get there early, but could just roll in when I rolled in. That makes a big difference to me, and came in handy today. Actually, the owner even said if he wasn’t here, just to let myself in. Well, as I write this, I’ve been here alone listening to tunes on the stereo, and working away, after having eaten. No owner has shown, but I showed two other couples around the place. Too funny. Anyway, on with my story of the day, and don’t forget to check the map 🙂 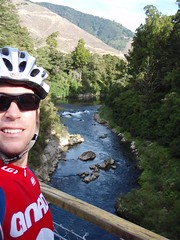