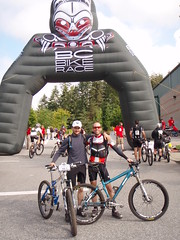 Wow! That’s all I can muster up to say at this moment. Day 1 of BC Bike Race did not disappoint. Although distance-wise it was a fairly short day, there was no shortage of challenges and obstacles to overcome. When you’re riding the North Shore, you quickly learn what mountain biking is all about. All I can say is that it’s a good thing that Carl and I put in some extra training at Camp Fortune on the downhill routes! Technical? You bet. Sure, the top teams were able to nail it at break-neck speeds, but us mere mortals in the middle of the pack had to eat a bit of humble pie and get off our bikes and do a little walking. I took pictures (obviously), but will likely be unable to post them till after the race, as connectivity will be spotty. The good news? The race organizers are letting me mooch some connectivity off them to get my maps and posts up, so you’ll at least have those. Final days’ results will have to follow after the fact as well, since they’ll probably have to be sorted through later. They may be posted on the BCBR site itself though, so you might as well check that out. Anyway, read on for the days’ tale, and check out the map as well.

Early morning I awoke on a couch, looking at ominous grey skies. However, over the course of the next hour and a half while I let the fog lift from my brain, the clouds moved away, and it was clear it would be a spectacular first day. We got ourselves organized and got a lift to the start line (thanks Jen!). We got there with plenty of time to get oriented and organized. Before we knew it, we were making our way to the starting corral. We packed ourselves in the front third or quarter of the pack, unsure how it would play out. When the starting horn sounded, it was slow to start rolling, but the steep hill in town started stringing people out. However, that was short lived, as the actual trail entrance for the day was a complete choke point, with riders forced to wait quite a while before hopping on the trail. Even after that, the going was slow, as we were suddenly forced to ride single file.

So, although the trail forced us to all slow and bunch up, it was also a good thing, as it meant we were starting out singletrack experience in earnest. It was exciting to finally be in the woods, turning the cranks and working our way up, over, around, down and through the sweet wilderness trails around North Vancouver. This whole day was all around the Lynn Valley, on some of the awesome trails built by the equally awesome North Short Mountain Bike Association. Thanks guys and gals! We even had the chance to cycle past some of the trail builders hard at work. I can’t even begin to imagine the effort it must take to get things in the shape they need to be to support so many riders, and good and bad weather. Amazing what you can do when you set your mind to it I guess.

Not too long after the singletrack started, we tackled our first mini climb for the day. Totally rideable but with a few technical bits like slippery roots and rocks to avoid. It was a very small introduction to what was in store for us. Of course, after the first climb came the first descent, which was exhillirating. Time for the gut and gear check. Lucky for me, all cylinders were firing, and my equipment performed flawlessly. It was quite encouraging. Unfortunately for Carl, it turned out there would be a few niggling issues the entire day. He had some problems with his shifting, and ultimately completely lost the use of his smallest chainring, which meant no ‘granny gear’. For those unfamiliar, it basically means climbing hills becomes MUCH tougher. Too bad we had two killer climbs in the day! Of course, once again, training paid off, and Carl was able to tough through the climbs like a champ. By the end of the day, Carl turned his bike into the repair guys, and is basically getting a ‘new’ bike tomorrow from all the new parts he’s getting put on 🙂

I’d love to be able to rhyme off all the trails that we were on today, but they went through them pretty quick. I know we were on severed d*ck, the bridal path, old buck, pipeline, and some others. If you’re from the area, you’ll know those ones anyway. The two big downhills were Severed and Pipeline, and this is where we truly saw the North Shore colors. Incredible. Pileups were a bit the norm on most of the descents, as when one rider has to get off and walk, there’s a domino effect. So, although I know we could have ridden a lot more than we actually did, we had to end up walking down a lot of the steep bits. However, I’m happy to report that I did get to play on several of the famous structures on the North Shore. A-Frames, bridges, planks, etc. I tried stuff I’ve never had a chance to try before. And you know what? I pulled them off, much to my happy amazement. It’s amazing what you can do when you just let the bike do the work and not over-think things. Of course, the opposite is just as true, and in several spots, I know I should have ridden, but I lost my nerves. All in all though, I was very happy with our riding, and the trails.

Wrapping up the ride, we pulled in to Lynn Valley Park just around 1pm. There were plenty of teams still on the course, but there were also tons that had already finished. We learned that the first team completed in just over half of our time! Crazy, and good for them. There are some amazing riders out here this week. I’m sure I can only get better riding out here for 7 days. Base camp was a hoppin place. From the tent city, to the various tents for massages, snacks and drinks, sponsors, racer relations, showers and washroom facilities, the Bear Den, etc. etc. It was great. I wandered around for quite a bit, but eventually, wound back up in the tent to work on this post, while super Carl had his afternoon nap 🙂

When I went for my shower, I learned another lesson. Everything in a large race like this is a waiting game. I think I was in line almost an hour before I finally had my 10 minutes in the shower trailer. Luckily, it was nice and warm, so it was worth the wait. They’ve promised us hot showers every night. In fact, they’ve guaranteed it! Kudos for that. After shower time, it was some more chilling ,then off to supper. Today was a little different than most days, since the course was short, we had a lot of down time in the afternoon, so don’t expect these long posts every day.

Supper was a nice spread of chicken, salads, salmon, bread, etc. catered by a local restaurant. It was plentiful, and we could eat as much as we wanted. I think I ate too much, as I now find myself confined to the tent while my gastric distension settles down 🙂 I’m also frantically drinking as much as I can, as late in the ride, I ended up getting a few of my world famous scream-inducing cramps. Not fun. I thought I had been drinking, but upon checking my reserves at camp, I noticed I probably only drank half of my fluids on the day. Not smart. I vow to fix that for the rest of the week. Hopefully no permanent damage has been done that will hold me back later this week.

Checking my watch, I see the nightly awards ceremony is only 15 minutes away now, so I guess I should probably sign off for now. In fact, that’ll probably be it for me today. I need my beauty sleep and need to do some mingling with my fellow gear-heads. Hope everyone is doing well, and check back for more race reports (hopefully) later this week. Ride on, ride hard. 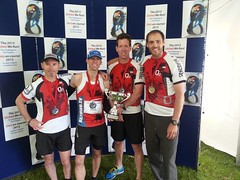 Note, the title is *not* wining and touring. This is (perhaps unfortunately) not a post about cycle touring in wine country :-). However, I’m still happy to say it does involve some drinking, lots of cycling, and even another race victory! As most of you know, I’m really more of an avid endurance racer than sprinter, but I find myself doing a smattering of short races these days, and actually faring quite well. My latest foray is the shortest to date, a 5-person 10km relay race, meaning I was only running 2km! I was actually kind of nervous about that, as I have no idea how to pace that distance. However, the majority of the post is dedicated to Deanna and I taking part in the annual Rideau Lakes Cycle Tour. I’ve got a bunch of pictures from that event to share, but no video, as this was purely for fun (and some good in-the-saddle training). Now read on to learn about both of these events! 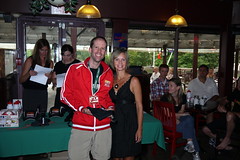 Greetings friends! Let me get right into this race report. To summarize the events of the Iron-distance race that I just completed, it was the greatest challenge I have taken on when compared to all my races before. Not for the physicality of the race, but for the will needed to complete the event. Indeed, this race had almost nothing to do with the swimming, biking, and running, and everything to do with sheer determination, and the assistance of good friends willing to help me get to the finish line with their own spirits. Yup, it was that kind of a day folks. I’ve said before that you only get out of a race what you put into it, so I had not been expecting the best race ever, given my lack of preparation, but I got way more than I bargained for with this doozy. Please join me on my journey by reading through the remainder of this blog post. I will indeed try not to pontificate too much, but there is much to say. As usual, don’t forget to check out the pictures from the race, then read on for the rest! 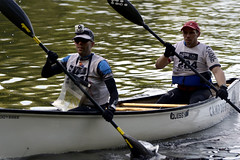 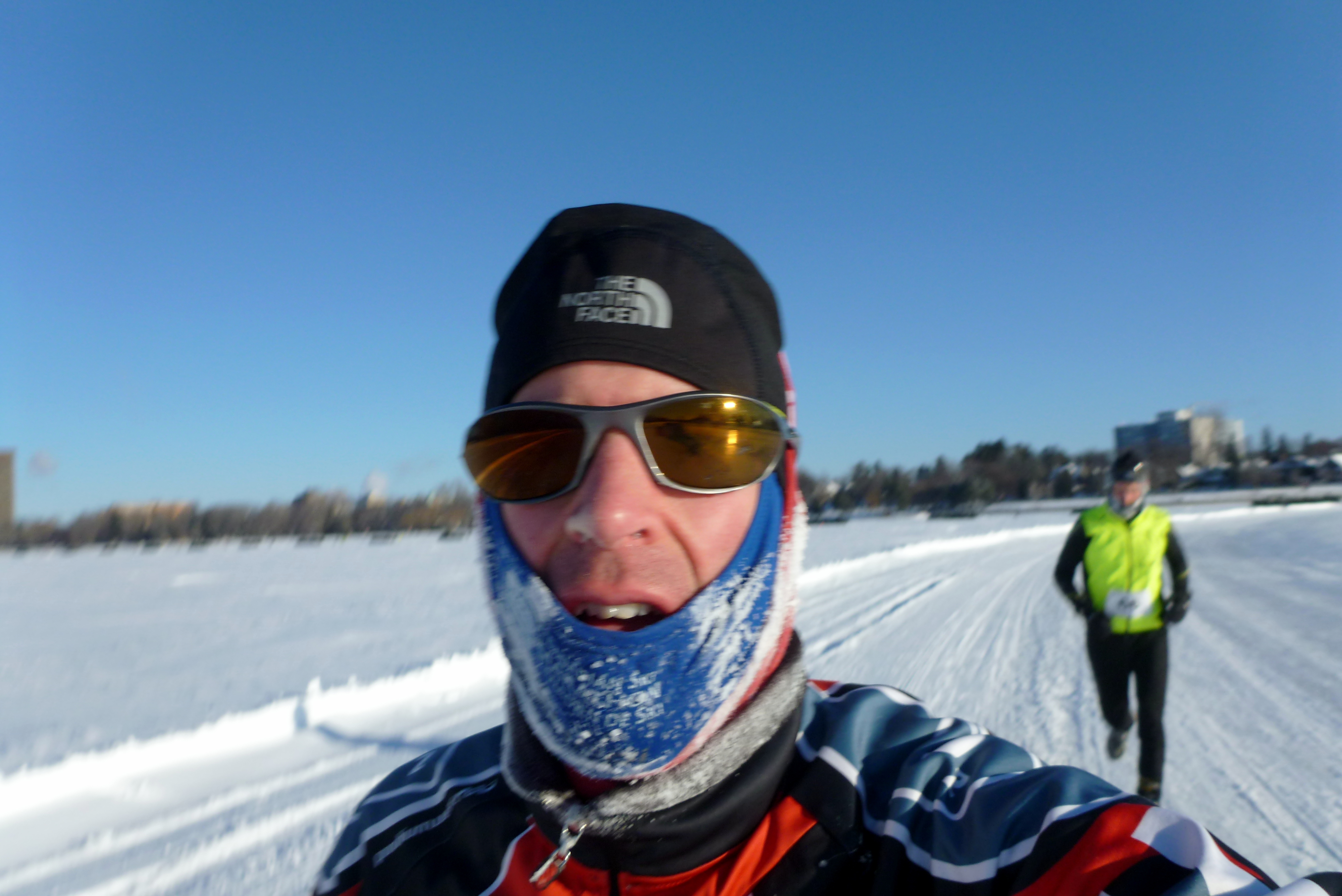 Greetings again friends. Winter is always an interesting time to be racing. And it seems that the annual Winterlude Triathlon is one […]