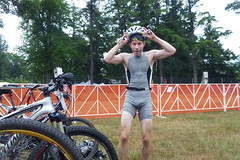 They say everyone has a doppelganger somewhere in the world. Well, apparently, I may have inadvertently crossed paths with my ‘sporting’ doppelganger at the recent inaugural Muskoka Grind Off-Road Tri. You see, I finished this race in 4th place in my category, a mere 1m14s off the podium. Okay, 1:14 isn’t that close in a 2.5hr race, right? Well, it get’s interesting event by event. For the swim, this fellow was a mere 3 seconds faster. The bike? He was only 16 seconds faster. And the run? Well, I took that one by 16 seconds! So in reality, our moving time was only 3 seconds different!! However, where I lost time was in transition, and with good reason. I had to get cameras mounted and ready for the bike and run, since I was on-site covering the event for Get Out There Magazine. As a result, I once again have a nice race video and some pictures to share with you all. Read on for the whole story about this well-run race at the Limberlost Forest and Wildlife Reserve.

Pictures from the Race

Regardless of how the event turned out, I must say that I have once again found a gem of a place in Ontario. The Limberlost Reserve is a really nice place for trail running, hiking, paddling, and biking. While it is privately owned, and there are active forestry operations there, it is also a reserve with over 70km of trails that are free to use by anyone (although donations are appreciated). This place is just east of Huntsville on the 60, and in all my trips in that area, this is the first time I’ve set foot there. Apparently they also host a great trail running ultra that I may have to look into!

The idea of doing an off-road tri was right up my alley. It combines two of my favourite sports, triathlons, and being off the pavement 🙂 The last time I took part in one was in Calabogie way back in 2006 (read my report here). I’ve done a lot more racing since then, but apparently, I’m still a 4th-place type finisher :-). At any rate, for this race, Deanna and I opted to camp once again in Calabogie at Jim’s place Friday night before and Sunday night. That left a drive from Calabogie to Huntsville on Saturday, and staying with family friends in the area, which was fortuitous, as while Friday and Sunday nights had good weather, it poured buckets in Huntsville on Saturday! Now on to the race.

We got up on Sunday morning with trepidation. Forecast had called for 100% chance of showers this morning. We had pre-rode the bike course Saturday in the blazing sun, and while an amazingly fun course, it would definitely be ratcheted up in difficulty level with heavy rain. Luckily, it was NOT raining, merely overcast, and the forecast had actually dropped down to like 20-30% chance of rain. Lightening was also a risk, which could really mess up the plans by the RD. He couldn’t have people in the water if there was lightening. Again, so far so good, and at the race site, things looked relatively calm.

I got my gear together in my transition area, and headed off to get my body marking done. Deanna offered to help by taking some video for me while I was out for the swim, and I also planned to film the bike course with my GoPro on the handlebars, and carry another camera with me on the run. We were slated for an 8am start, and that went off without a hitch. The swim course was a double loop. 200m out, 100m across, 200m back, around a buoy in knee-high water, then out for a 2nd loop. What can I say? It was uneventful. I gave it a good push and came out of the 1km course in under 18 minutes, good enough for 13th. Happy with that, I trotted off to transition to get out on the bike.

I took a few minutes in transition fiddling with the camera on my bike, as well as getting all my gear on and smiling for a quick photo before heading to the mount line. As a result of pre-riding the course the day before (2 full loops), I knew what I’d be up against. The trails are actually designed for hiking, so there are no flowy berms to follow on turns in the woods. Often, there were sharp turns with rocks lurking just out of sight. Being aware of some of those would definitely prove valuable to me, as with the overnight rain, things were much slicker than the day before. The trail was immensely enjoyable, and I found a pretty good groove on the pedals. Of course, I know I’m not a world-class mountain biker, so it didn’t take long for Mike Abraham to catch and pass me on lap 1. We were having another of our unspoken battles for supremacy on a racecourse :-). My only hope would lie on the run.

In addition to the sharp turns, there was actually a mandatory dismount section where there were rock steps taking participants down a steep section. I had ridden it the day before, but can confirm they made the right call to make this a walk section. I suspect several people would have gone down and possibly gotten injured otherwise. I stayed focused the entire 2 laps, and don’t think I lost too much time on lap 2, as I kept a steady output. I managed to pass a few people, and was only passed myself 2-3 times. Heading back to the transition, I had the 17th fastest bike split, but looking at the numbers, I had unfortunately lost 9 minutes to Mike, who is a very strong mountain bike. That was a huge deficit to try and overcome in an 8km run! But at the time I had no idea where I stood. Off to the run!

Okay, with the bike out of the way, it was time to tackle my strong suit, the run. I tried a quick transition, and was just running out of the t-zone when I realized I’d forgotten my hydration belt. Given the heat and terrain challenges, I had opted to wear a hydration belt. In retrospect, I regret the choice. Not only did I lost time doubling back to grab it, but the damn thing was bouncing around a fair bit and kept rotating on my torso. Although it meant I could just run by the aid stations, I think it was more trouble than it was worth and led to some lost time. But I digress.

The run consisted of a single scenic 8.6km loop around a lake. The trail was properly challenging in spots, with lots of roots and rocks to navigate. Although it was relatively flat overall, there was one moderate climb at about the mid-point. I focused on a steady, near-redline pace that I hoped would catch me up to Mike (and all others ahead of me). My efforts were rewarded in the form of passing 6 people on this run, but never even catching sight of the mighty Mike. I also got an additional reward towards the end of the loop in the form of a severe left hamstring cramp. I had just passed a fellow, but then had to reduce speed to a limp (as well as totally stop to massage it out) for a good 200m. Dang!

Luckily, I kept this competitor behind me, and managed a little finishing kick when he tried to pass me coming into the finishing 100m of the course. I didn’t like doing it, but I pushed hard to get to the line and keep my spot. Of course, then I found out he was in the duathlon, and hence a different race! Ha ha ha. Either way, the push felt good, and I finished the race quite exhausted and knowing I had put pretty much my all into this. I had the 5th fastest run split, and had put 4.5 minutes on Mike, but in the end, that gave him victory by 4 minutes. Well played Mike! I knew the race would be won or lost on the bike course, by far the longest and hardest part of the race. Overall though, I was very happy with my performance.

All in all, a great day at the office for me. The race was excellent through to the end, where an amazing post-race spread of food was on offer for racers, all catered by local businesses. That included a tasty post-race beer from Muskoka Brewery. Yum! As we packed up and headed out, the rain finally made an appearance. So basically, the entire event had a bubble of good weather for us. Nice. I’d be back in the area in 2 weeks for a 30 hour adventure race, and till then, just training, and volunteering at another race. The summer race season is winding down kids, but stay tuned for a few more reports from cool events! 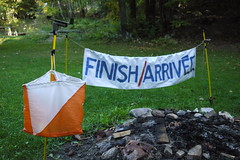 Nope, in this case my friends, rogaine is actually a backronym which stands for Rugged Outdoor Group Activity Involving Navigation and Endurance. Quite a mouthful, right? It is also named for the founders of this kind of event, ROd Phillips, GAIl Davis (née Phillips) and NEil Phillips (ROGAINE). Now you might be wondering what a Rogaine actually is, seeing as this is the first time I’ve ever mentioned it. In fact, it was also the first time I’ve ever taken part in one. Essentially, it is a sport purely consisting of orienteering (using a map and compass to find checkpoints). It is all done on foot, in teams, in this case a team of 2. You have a given amount of time in which to find as many controls as you can before the cutoff. Each control is worth a set number of points. The team with the highest score wins. Getting all CPs is usually very difficult, and if you cross the line after the cutoff, you lose serious points for every minute. In this sense, the sport is very much in line with what I love about AR, only it is all on foot, and is a matter of pure speed, and route tactics. Read on to learn all about my first experience, and how I did. Along with the customary pictures that I took, I invite you to also watch the video race review that I put together for Get Out There Magazine. Afterwards, read on for my story. 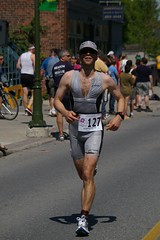 Fondest greetings race fans! I’m happy to report that I’ve finally gotten past all my race postings related to the 2009 BC Bike Race. I know some of you have been waiting for something new from ActiveSteve, so I’m happy to bring you my latest blog posting, which is also a tasty race report. The results of this race, which was the Graham Beasley Olympic triathlon, marked a bit of an anniversary of sorts for me. As it turned out, this was the 2nd time I’ve taken part in this race. The first time? 5 years ago! This in fact was the first ever triathlon that I took part in. That time, I did the race swimming in baggy shorts, biking on a mountain bike, and capping that off with my first ever run after swimming and biking! The result in 2004? 2 hours, 58 minutes, and 57 seconds. I was 13 out of 14 in my category, 90th out of 107 for males! Needless to say, the results this time were much better 🙂 To see the pictures, click on over to the folder of pictures on Flickr that the lovely Jody took of me. 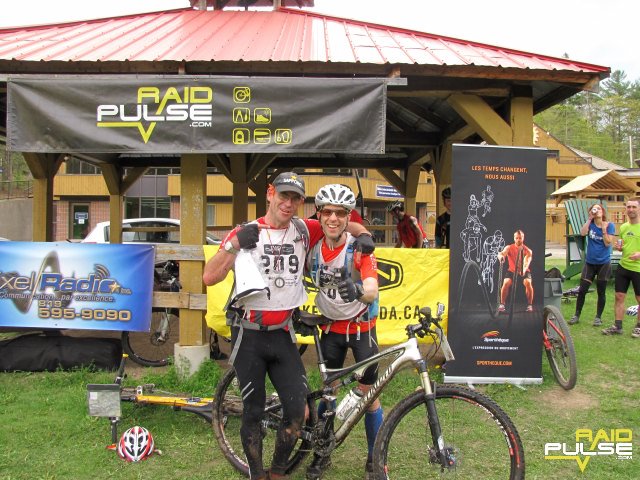 I’m usually happiest in two situations. First is when I’m pushing myself physically and mentally, and secondly, when I’m outdoors enjoying all […]