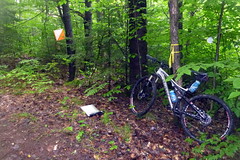 Greetings loyal readers! It’s been a pretty busy year once again for me in the race world. I’ve participated in and covered a whole range of events from simple running events to obstacle runs, mountain bike races and triathlons. I do all of these because I love participating in them, regardless of the outcome. I enjoy the challenge of new events, and just getting to spend time outdoors with like-minded people. However, not a single one of these events could ever have gotten off the ground without the help of volunteers. To those ends, even though I’m very busy, I do try to pay it forward now and again. This past weekend, I did just such a thing at the 4-hour Raid Pulse sprint race. The key with volunteering at these events is to view them as fun, not work, and to see the great time participants are having as they tackle what could be their greatest challenge of the year. Don’t they deserve a well-run race and to cross the finish with a big smile? I think they do, so read on about the fun I had at this top-notch event!

Raid Pulse is celebrating 11 continuous years of putting on adventure races. That’s a lifetime in the adventure racing community. Its very lifeblood is the dynamic duo of Thierry and Annick (who are now also proud parents to boot!). For the past 11 years, they’ve been putting on high-calibre local events for anybody looking for a challenge, be they experience racers or newbies. The races have ranged from 4 hour races, to 24-hour continuous races, 2-3 day staged races, and even winter events. I have participated in the majority of them and can not recall a single bad experience. I know that a lot of local racers only participate in these events, and others that got their start and interest in the sport through Raid Pulse’s events. As such, I have volunteered on a number of occasions to make sure people continue to have great experiences there.

With the 30-hour Wilderness Traverse race coming up the next weekend, I decided to not race, but to use this event as a venue to test out a few new bits of kit, and get in some training under race-like conditions. As such, Thierry gave me a pretty prime responsibility. On race morning, I was given the advanced mountain biking CPs, and asked to set up that part of the course, patrol it, then take it down once all the racers had gone through. This meant I’d get to bike the whole course (since I opted to bike from the headquarters rather than drive), and experience what the racers would experience on the bikes. In the end, I put just under 40km of biking under my belt, and had a great time. One piece of gear I was testing were my new tubeless 29er wheels, and they performed admirably, even under some pretty crap conditions (I’ll explain). I also got to test a new ‘front pouch’ system for my race pack, along with a home-made attachment system for it. All worked well, making me confident going into Wilderness Traverse.

Although we’d had drought-like conditions for much of the summer, the rain has finally returned to these parts, and the forecast was calling for rain all day. However, we once again got lucky, in that during the race, if was merely overcast. It had rained the night before, but then cleared up. That made the start of the race wet, but drying out over time (with the sun even making an appearance later!). Much of the race took place in the confines of Gatineau Parc, and I headed off on my bike from HQ in Wakefield at about 9am bound for Lac Taylor. I was confronted with a trail closure not long after setting out due to highway construction, and opted to hike up and over the area. This is where I learned of my disdain for clay.

With the rains, my bike (and feet) sunk deep into clay as I hike-a-biked the construction zone. The end result were wheels that seemed all but encased in concrete. Suddenly my new lightweight wheels seemed made of lead! I lost probably 10 minutes just trying to clear it all off before setting back out. I later learned racers actually took the main road out, and crossed the highway with the help of police instead of taking my stupid route. And on the way back, they were allowed through the fenced-off construction area to take the quick route through the construction. Silly me!

At any rate, the rest of the ride was fun on the trails, and I passed both the paddling section, as well as the bike drop-off where the trek section was located. I got my 2 remote CPs installed just after 10:30am. The race had started at 10am, and I wasn’t expecting anyone until at least 11:30ish. And true to that, my first visitor was sometime around 11:20am. For the rest of my time in the area, I hung out near a lake, with a bug-net on my head (another experiment), eating, drinking, snapping pictures, and encouraging racers. I had a race radio and was in touch with Thierry a few times to get a feel for how many teams to expect. I also recorded all the times of the people that I could as they punched the control.

After a few hours, I packed up the two remote CPs, and once again took the trails back out to the headquarters. Along the way, I stopped at the paddling and advanced trekking section, which is where most teams were now battling it out. This was the last stop before the finish line, and it was a mere 5 minutes or less away. People all seemed to be having fun, and as usual, there was a good group of volunteers on hand to make sure things went smoothly.

Rolling into the finish, there was once again a small group of helpers recording times and helping answer racers’ questions and collect the used race bibs and bike plates. The race wrapped up in the next hour or so, after which we all had a great meal of rotisserie chicken from Au Coq, while watching a slideshow of the days images (they actually ended up using mine, as they were auto-rotated). There was also a good array of prizes, most of which were drawn for, rather than awarded, which is in the spirit of including more people in the event.

All in all, Raid Pulse once again proved to be a well-oiled machine with no hiccups. We got lucky with the weather, there were no major injuries, and I believe there was practically a 100% success rate out on the course. Kudos to all! The whole point of this post is two-fold. First, do what you love. Second, if you love something, help it along, and do what you can to show others why it’s so great. Without volunteers, there would be no awesome races, so if you can, get out there once in a while and lend a hand! Up next: 30 hours of suffering and fun at Wilderness Traverse, which I WILL be racing and WILL be covering! 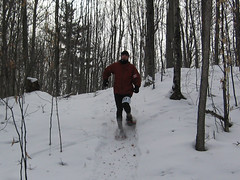 Brrrr.. It sure was cold out there this weekend! To enjoy the cold weather just a little more, I had to take part in my third race in as many weeks. Yes, it was time for the second race in the 2007 Mad Trapper showshoe racing season. To make it extra fun, it was the dreaded ‘Hilly’ course. Two laps each consisting of 5 kilometers of hills, hills, and more hills. Luckily, with every up there comes a down, as you can see by the picture at the right. I’m a big fan of running downhill, not so much of running uphill. Of course, given the terrain, I didn’t really have much of a choice. Also sadly for me, I was having an off day. I’ve already accepted that, so to save you any great suspense… I didn’t win 🙁 In fact, I only came in 14th place. I believe that’s my worst finish yet in a Mad Trapper race. So, let’s go back to the start of the day and review the events of the day, shall we? 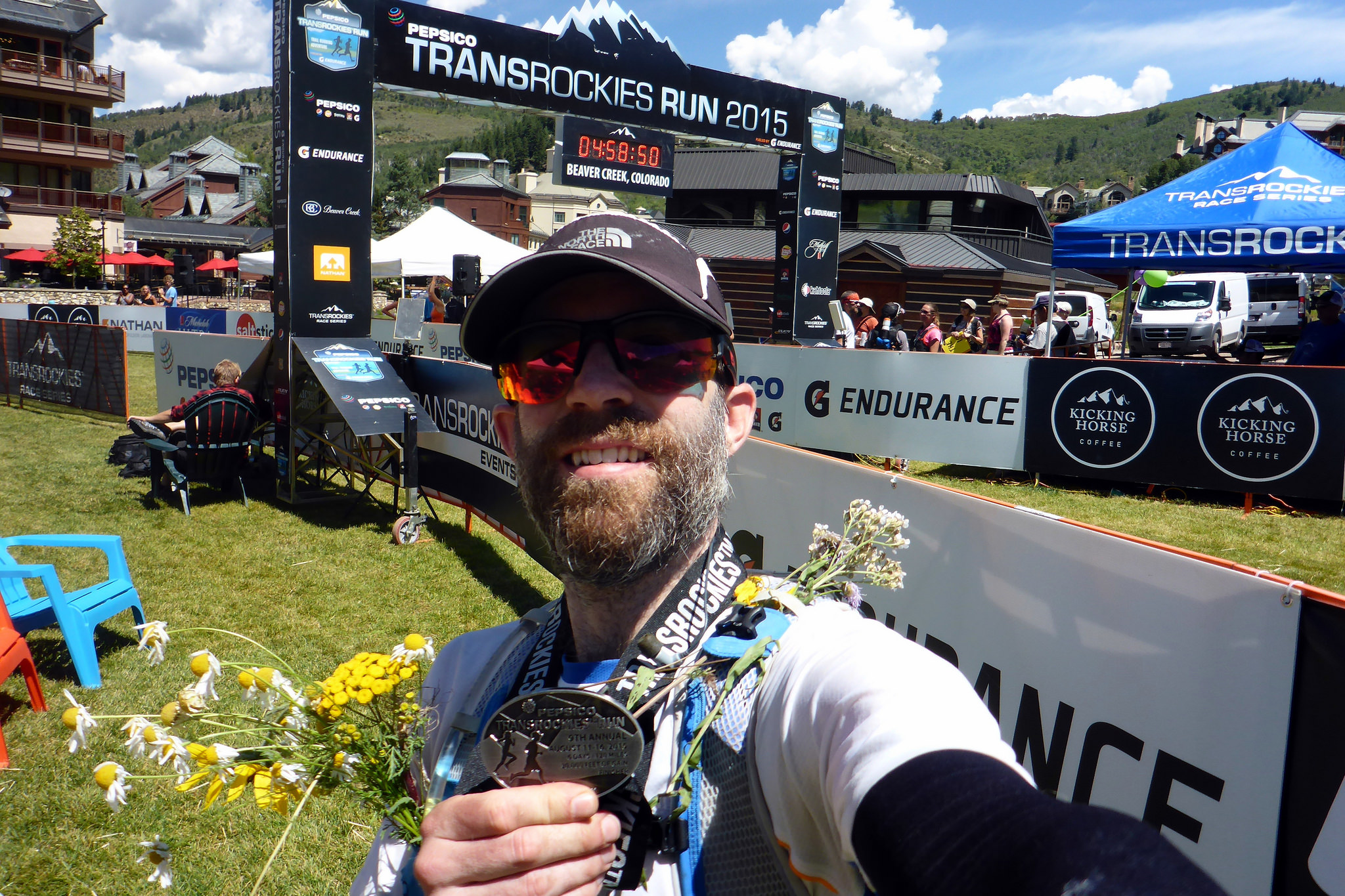 Welcome back to another VERY exciting chapter in the adventures of ActiveSteve! This post finds us high in the alpine meadows of […] 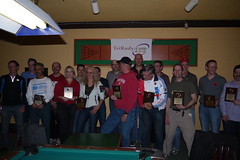