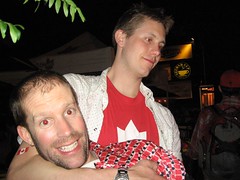 Whew! Where has the time gone? By checking the ole time stamp on my posts, it would appear as thought it’s been exactly a month since I’ve posted anything here. Shame on me! Guess I was just too busy basking in my relative glory for the Quest race. Where would I go from there? Well, apparently, the answer is nowhere in particular. The past four weeks have been spent recovering and revelling. I’ll try to put up a few short posts and pictures to bring y’all up to speed on all things Steve for the month of July. To start with, the week after Quest for a Cure was really a resting and recovery week mainly for me. It was also a preparation week for July 1st, which as usual, would undoubtedly bring forth the traditional debauchery and celebration. This year’s main goal was just to party, and possibly to make sure that Rob didn’t make a return trip to the local drunk tank, of which some of the details are still quite foggy to Mr. Sample.

To kick the day off, our friends Adam and Terry graciously invited the crew over to their new place out in Embrun for a Canada Day brunch. It was our first trip out that way, and although the trip is a bit of a drive out of town, they do have a beautiful house, complete with a pool! Sadly, we didn’t take a whole lot of pictures of the domicile, but regardless, you can check out the C-Day 2006 pictures on our Flickr site. The grub was great, the company better, and the day was looking like it held some promise as far as weather was concerned, which is always a concern it seems the past few years with freak rain storms on the big day.

After the brunch, it was a burn home to get ready for the main event, the party at 40 Main street. This party has been the preferred venue to celebrate Canada Day by us for the past few years. In the past, the main reason was because my band was slated to play, but this year, it was just for the fun, and to meet up with old friends from the music days. For that, I can definitely say that it delivered. There was yet again a huge line-up of bands, and a seemingly endless supply of draft beer. I believe it was something like 27 kegs. This year, Steamwhistle even provided the party with a Keg Express trailer, to keep the beer cold, and allow an easy system for pouring beer. It was AWESOME! Of course, no Canada Day is complete without some excitement. This year, it came in the form of Law Enforcement. Yup, the cops were there somewhere around 10 (for some reason I’m fuzzy on the exact time…), responding to a 911 call for an ambulance for a diebetic that needed some help on site. While they were there, they decided to ask for our liquor permit. Ummm, permit? Well, this year, they called our bluff, and insisted that beer no longer be served, effective immediately. Overall, I would say they were curteous enough, and just made sure the beer was no longer served, and threatened to charge anyone who left the yard with beer in a cup. That was my cue to try and ‘police’ the exit myself, much to Jody’s chagrin. I wouldn’t leave the gate, insisting I had to make sure no one left with beer.

Eventually, that meant Jody had to find a replacement for me, so that we could all go see the fireworks. Incidentally, the ‘we’ included Jody, me, Rob, Anna, Alix, Matt, Lindsay and her crew from K-dub. We headed to the canal, and someone got the bright idea that we could see better from the overpass. What’s that? Play on the highway while under the influence late at night on Canada Day? Not the brightest idea, but happily, not mine, and I didn’t stick there too long. I wanted a snack. That’s when Rob got into trouble, for helping me get my snack and get to a bus, while inadvertently ditching Anna, who had no house keys. Long story short, he was in trouble, but it all worked out. On the other hand, my trip home didn’t work out so well. I hopped on a bus, insisting it would take me home. It didn’t. Eventually I got off said bus several km from home, and had to walk. Oh, and did I mention the freak rain storms we always seem to get on Canada Day? Well, they kicked in at that moment, so I had to hike home in the pouring rain. Well, more accurately, stumble home. At one point, I sought refuge in a garage that I found was open, but decided I should keep moving, lest I should fall asleep and be awoken later by Ottawa’s finest, when the owners called them. When I got home, I had a devil of a time working the door, but eventually made it in and promptly slept well into July 2nd. Ahhh, long weekends.

The next day, after sleeping in for a long time, I tended to the grounds, and then Jody and I invited ourselves over to Andy and Irene-Anne’s for a barbecue. It was pretty low-key, but nice to just chill out and enjoy the good weather and some yummy eats. We also got to witness Stella’s first attempts at skateboarding. Too funny.

To finish off the weekend, Jody and I did some house work, and squeezed in a great 5-hour hike in Gatineau. I decided to take us out to the Luskville Caves, to show Jody how cool they were. However, rather than park at Lac Phillipe, we took a parking lot much further away, leading to a lovely 20+km hike. It was actually great fun, and we got to explore the caves a bit too. A few pictures are on Flickr for that too, all under the Canada Day weekend pics. Sadly, we didn’t bring Jonah along, since he wouldn’t be welcome everywhere we planned to be. Sorry buddy! All in all, Canada Day weekend was just what I’d hoped for. We started with the Sunset ceremony on Friday, and capped it off with a great hike in our awesome local Park. Caught up with old friends, and suffered only a minor hangover. What more could I ask for? 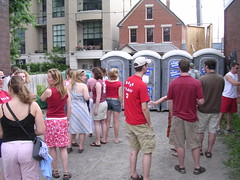 Alrighty, now that Kev has worked out some kinks in the mighty system, I’m ready to blog directly from within Flickr. Sweet.. Yes Boris, perhaps I will achieve Zen and use Flock eventually, but for now, gotta get my training wheels on right. At any rate, here you will see a picture taken last Canada Day (July 1, 2005). My band, named Comfort Station was playing at an outdoor party for a crowd of about 500. It was sweet. Anyway, this was a shot of the Comfort Stations at the Comfort Station gig. Check out the whole set of pictures on flickr. 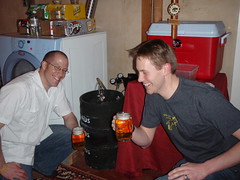 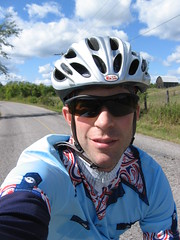