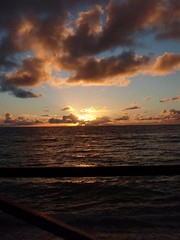 Well, after a slow start, things are truly humming along now on the Fijian Islands. Unfortunately for me, this leg of the journey is almost over, and it’s back to the mainland tomorrow night. However, that still leaves me almost 24 hours on one more island. Oh geez, I just realized that I haven’t written in a couple days though 🙂 So of course, I do have some additional strories to share with you all about my last couple days in the South Pacific. The weather has definitely done a complete about-face, now that Daman has left Fiji for good, with limited damage having been inflicted. I’ve realized that if I try to write about everfy last thing that happens to me while I’m away, you’ll probably all get very tired of reading my stories, so I may have to try to shorten up some of the adventure-log stories. However, much as I write for all my readers, I’m also writing for me, and this serves as my travel journal as much as anything else. That being said, read on if you’d like to catch up with ActiveSteve!

As I mentioned, Korovou was a pretty sweet little resort that I was at a couple days ago, and it even gave me the opportunity to pop 4 blog posts up on the site, so for that I’m thankful. However, that was pretty expensive and slow, so this post likely won’t be up until New Zealand, as with the pictures as well. The next morning at that resort, after an INCREDIBLY hot and sticky night, I got up early and headed straight for the fresh water pool to ‘freshen up’. It was a good start to the day. I also realized that for the first morning, I wasn’t rushing off to the loo to take care of plumbing problems. Sweet, perhaps I’d turned a new leaf. At breakfast, after realizing it was Sunday, we were all invited to attend a local church service on Naviti Island, which we were on. I hadn’t planned on it, but after seeing that most of our little crew were heading over there I decided that I might as well too. This would prove more beneficial than I would have thought.

The service was conducted mainly in English, and was pretty nice. There was a bit of raising the roof, with a nice little trio singing with some good electronic accompaniment. The service leader also took the time to thank us personally for attending, and we got to mingle with the locals as well in the church, exchanging blessings, etc. The point of the sermon that day was that you have to (obviously) trust in God, but also that you can put all your problems on him, and he’ll take care of them. So, I silently passed my bike woes on to him. It couldn’t hurt, right?

After the sermon, we all congregated (get it?) back at poolside, and enjoyed the beautiful warm weather exchanging addresses and contact information. A few different people were also heading to NZ next, and we hoped to try and get together at some point while we were there. I also scored a calling card to use while there from a couple heading home. Sweet. By lunchtime, I cracked open my last quart of beer that I’d lugged from the mainland and enjoyed it in what I’d call perfect conditions in the South Pacific. Now I finally understood why people actually come to these islands. It truly was paradise found now. The time however came that I had to board yet another water taxi bound for yet another destination to make yet another full new group of friends. It’s amazing how every single day starts anew with seemingly best old friends, then you leave them, and start the process again. This kind of trip really puts you in contact with a large group of like-minded people. But I digress. Today I was off to Wana Taki, the cruise ship. Yippee!

The boat ride was less than an hour this time, and on the boat, I asked the tour company to once again check on the status of my bike. They tried to put a few calls in to the mainland, but were unable to connect, and told me to check back in from my next boat, the Wana Taki. Fair enough. In some regards, I didn’t really want to know, as I feared it would be bad news. Once the cruise ship was in sight, we got taxied once again to our new floating quarters. Boarding the boat, it was again a fresh batch of faces, with the initial shyness that comes with it, but once again, people sought other people, and by lunch, we were all mingling and a friendly group. Here an Aussie, here a Scottsman, here some Americans, here some Germans, here an Italian, you get the idea…

After eating, there were a couple Danish ladies and an English girl that wanted to go kayaking, and as they were tandem kayaks, I joined them. We had fun paddling around on our own, found a deserted beach, and swam among the fish and the coral. Turns out this area was great for snorkelling and diving as well. Intriguing. There was a dive master on the boat too, I made a mental note to look into scuba diving. Once we wrapped that up, it was back to the boat. Apparently, there had been a call for me at the boat. The news? My bike! It had arrived in Nadi, and was waiting for me at the airport. Strange coincidence, wasn’t it? I told everyone there the story about going to church, and that God took my problem for me. You be the judge whether it was conicidence. Either way, I was one happy camper. Might as well celebrate, right?

Well, how to celebrate? Read on for a special post next how I did that…. 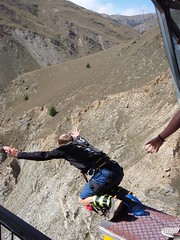 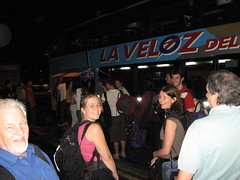