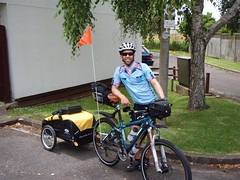 Well, my trailer had seemed so massive when I picked it up, and I had visions of oodles of extra room for all my things held safely within it. Well, I don’t know if if shrank in the meantime or something, but I had a rude awakening when trying to pack it. The massive duffle bag I had sort of fit in it, but there wasn’t room for all my things in it as well. So, I had to get to work on slimming the load. I got rid of a bunch of my clothes, of which I had only a little to start with. Next to go were running shoes, a running bottle, and a day pack (I had 2). Once these things were stuck in my bike box, I was able to sort of get everything in the trailer, and cover it up. Well, except for my Pelican Case with all my fragile electronics!

Good thing Jody got me that thing for my birthday. I’ve ended up having to keep it strapped to the top of the trailer, exposed to the elements. Luckily, it’s made for just such challenges, so I feel pretty comfortable having it out there. In fact, it’s already taken some damage, but that’s for later. Once all things were packed and lashed, I was ready to roll. Kevin took a quick shot of me for posterity, and I rolled out of Cranbrook Mews for at least a couple weeks. I know it’ll sound obvious, but the first thing I noticed was how damn heavy it was to haul that junk around. I’ve already decided when I’m back in Auckland, I’m stripping more weight. Next to go will be my camp stove, pot, place setting, and fuel cans. I just don’t think I’ll ever be that far from being able to get take-away. Even if I am, I’ll get food I don’t have to cook. I’d ditch the sleeping stuff, like tent, sleeping bag and thermarest, but those I still think might come in handy.

Anyway, back to the bike ride. Since I had a slow start, I decided that the first day would take me as far as a place called Helensville, a mere 60km away from Auckland via the back-ish roads. It was the right call. Even getting out of Auckland was pretty annoying and challenging. I had to go all the way to downtown, then take busy streets out to a bike path leading out of Auckland. After a while, I lost the path, and had to ask for help finding my way. Ironically, the road biker I ran into is a fellow who splits his time between Toronto and Auckland, and owns the Italpasta Racing Team. He’s also great friends with Kiwi Mike, who is a well-known Ottawa chap at the Cyclery in Ottawa. Again, small world. He led me out for a while, then pointed the right way to take. A wave and a thank-you and off I went again.

Shortly after finally clearing the Auckland hurdles, I was on the 16 heading to Helensville. There, I discovered the joy of hills. I kid. It’s pure misery when you’re hauling so much weight. Granted, the grade on these hills ranged between 8 and 11%, so I did have a reason to curse. Also, as many have pointed out, the roads are narrower, there are no shoulders, and drivers aren’t always so nice. I’ve been told now that North Island in particular can be hellish. I agree. I’ve already had it up to here. I’ve also already managed to wipe out and flip the trailer. However, that wasn’t anyones fault but my own. I was biking along a steep street, when there was these sort of two curbs on either side of the lane, presumably to act as some sort of passing barrier. Somehow, my left wheel of the trailer hit the curb, and then managed to flip over, this caused a chain reaction, pulling me down into the street. Ouch.

The worst part was trying to recover the bike. With all that weight, it is very unwieldy to get the trailer back upright. A driver was nice enough to pull over and was going to offer help, but by then, I had the trailer back up, and waved them off, telling them I was okay. Physically, I was, and as a bonus, I learned a bit more about how to control my load. However, I now had a little tear in the trailer fabric, little chunks taken out of my Pelican case, and a damaged wheel skewer on the trailer. It looks a bit out of alignment now too, which really sucks. As you might imagine, if you have a 2 wheel trailer, having one wheel not track straight is a real drag, literally! Oh well, I pounded it into as straight as I could, and kept on going.

Helensville seemed to take forever to get to, and by the time it did, I was definitely ready to call it a day. I’d only travelled a bit over 60km, but with that weight, it was very hard work, the stats on the map tell the story, and has lead me to reconsider my overall game plan. However, I’ll give it another few days before fully deciding what to do. My stay in Helensville was great, for 32 NZD, I got a shared room to myself, in a place more like a bed and breakfast. They also had a Spa, so I had a beer and a soak later in the night. I got some groceries, and made a mini-feast for myself to refuel. Tomorrow is a new day, and I have to push harder to see how things go. Anyway, I’m tired, so time to go to bed.

Driving on the wrong side of the road is also going very well for me BTW, I have no problems anymore. I’m being careful, so please don’t take my above little misadventure as me being risky. I have as many safety features going on as possible, and when traffic gets particularly hairy, like with big trucks, I’ll sometimes stop biking and wait for them to pass. I’ve decided a wipe out at high speed going downhill would truly suck. Well, onward and upward, talk to you all soon, virtually. 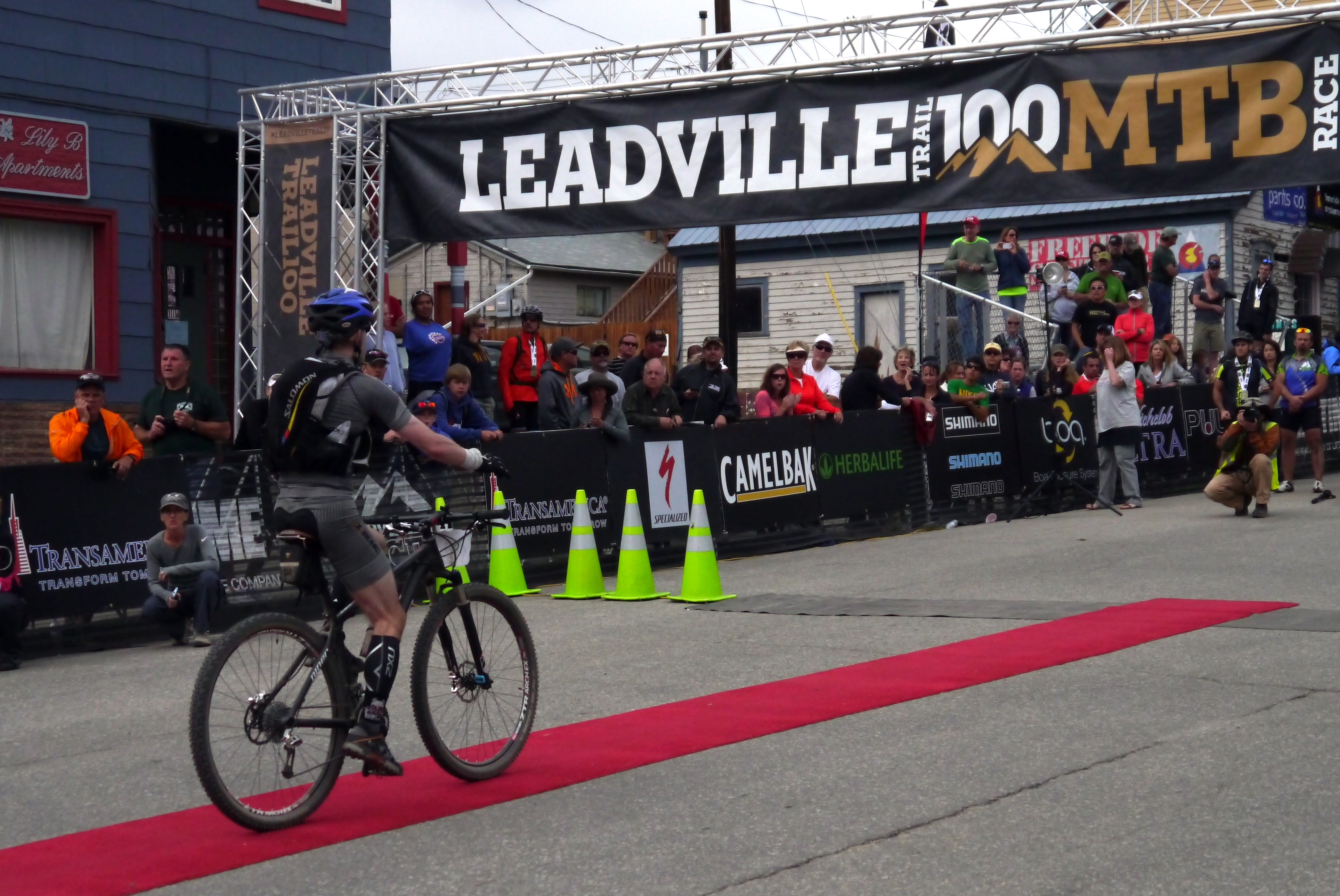 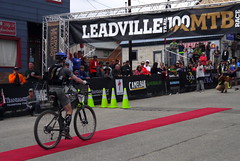 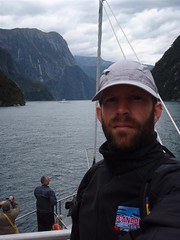 22/02/08
Hello all, and welcome to another chapter in my ongoing adventures. This day’s story is brought to you by the word Fiord, and not Sound. More on that in a little bit. Essentially, this was another rest day. Not that I necessarily needed it, but simply because I’m in Te Anau, and this is where the only road that heads out to Milford Sound starts and finishes, and I wasn’t going to come all the way to New Zealand without checking out the world famous Milford Sound! As such, I had booked a coach and cruise trip while I was still in Queenstown a few days ago. This was a bit of a gamble, since I didn’t know what the weather would be doing, but things worked out just fine, as you’ll find out if you read on. As per usual, and I’m sure I don’t even need to mention it anymore, you can check out the map I put together for the day, as well as hopefully some pictures that I’ll try to get up on Flickr. Read on, mates! 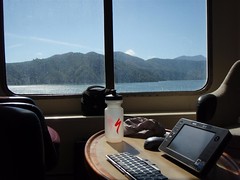 21/03/08
Howdy folks. Welcome back. Today sadly marked my departure from New Zealand’s South Island, on my return journey to Auckland, and ultimately my leaving of Aotearoa, after an awesome three and a half months. In order to make it a little more symbolic, I chose to ride my way off the island. I stayed in Blenheim last night, which is about 30km from Picton, where the ferry terminal is. My plan was to get up, cycle into Blenheim first to see that a little bit, then make the final journey up to the ferry terminal in Picton. I had an awesome night’s sleep at Ann and Murrays, and was up the next morning and sitting at the breakfast table with them by 8am. Of course, it was also Good Friday, which meant that most shops would be closed, so it was a good thing I ate with them, because finding a pie might have been tough :-). Read on for a little more info on my final day on the South Island. No really big stories, just a short narrative. 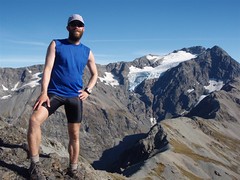 18/03/08
Greetings from high in New Zealand at Arthur’s Pass village. I’m in the cafe/store at the moment just killing some time before my train gets here to whisk me back to Christchurch. I’ve taken advantage of the time to book all my remaining rail travel, and just made the realization that this is Easter Weekend coming up. Looks like I might end my trip in the tent, as hostels are booked pretty solid for that weekend already. Oops. Hadn’t counted on that at all! However, that’s the future, you’re probably much more interested in the recent past and present, n’est-ce pas? Today was an absolute stunner of a day up in the mountains. I must have a tramping weather horseshoe up my butt, because yet again when I tramped hard and fast up into the mountains, I was rewarded with clear blue skies and some of the most magnificent 360 degree views I’ve had in my entire trip. I’ve looked at my pictures, and sadly, they can not do justice to what I actually saw. In spite of that, please check them out, and the map showing you just where I went hiking.