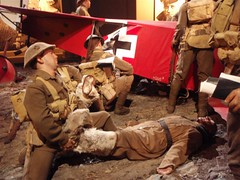 As my last post already let you know, the train ride up to Blenheim was pretty much a blur for me. As was the bike ride out to Ann and Murray’s place, located on the outskirts of Blenheim. They have an idyllic location in the farmlands of Blenheim, nestled around a bunch of different grape growers. They themselves aren’t farmers, although for a spell, they were growing olives and making olive oil. I didn’t get the chance to try theirs out, as they had none left. They sold that property off, and now only do hobby farming so that they have fresh vegies with their meals. Most of the stuff we ate, apart from the meat, was all grown in their garden. Tasty produce, that’s for sure.

When I arrived there, Murray was there to greet me, and show me to my room. I had a patio door leading off to the back yard, with great views of the surrounding mountain ranges. Not too shabby if you ask me. We all had a bit of lunch once Ann got home, and got to know each other a bit. They were actually hosting a movie screening that afternoon for a club they are part of, so I had to make myself scarce. I was presented with a couple maps and suggestions. One was a guide to all the area wineries, and the other just an area map. Number one on the list was a visit to the Omaka Aviation Heritage Center. This place has only been open about a year, and houses an impressive collection of aircraft from world war I. All of the pieces are apparently owned by Peter Jackson, and indeed the entire facility is run as a trust of his. He actually owns an aircraft building shop in Wellington as well, where replicas are built. In the center, the planes are both originals and detailed replicas. A number of them are also still flight-worthy, and are taken out from time to time for special shows.

The admission is a bit pricey compared to other museums at 18NZD, but I didn’t feel cheated in the least. One walk through will show you why. I spent several hours there, checking out every last memento and reading all the descriptions. The most impressive part of this center were the amazingly realistic sceneries built around the actual planes. These were all meticulously crafted by Weta Studios, who were responsible for all the creatures and sets of LOTR. These guys know how to make things look real. Once they are up, have a look at the pictures I snapped in there (photography is permitted). They’ve also made sure that the lighting is very photo-friendly. I could go on and on about it, but I’ll just leave it at the fact that when passing through Blenheim, make sure you visit that particular site. You won’t be disappointed, I guarantee! There is even an amazing story of a Canadian posted in there, and his unbelievable dogfight where it was him against 60 Germans. Insane!

From the center, I got on my little bike and started pedalling around just enjoying the beautiful day and all the beautiful vineyards along the way. I didn’t actually visit many of them, as I had one place in mind to get to. It was already after 4pm, and the majority of the places close between 4 and 5pm. I was heading for Highfield Vineyard, which has a tower as part of the vineyard, with great views over the plants. While there, I sampled some Reisling and Sauvignon Blanc wines. This area grows probably 85% Sauvignon Blanc varieties, and is best known for those. Once I had chosen my bottle for supper, I carefully loaded it into my backpack, and was back on the road, I thought I’d head downtown to check it out, but by the time I was back in the region where I was staying, it was already after 5, and the heat and hangover made me decide to just head back to my ‘home’.

Once back, I had a nice shower, and started chatting with my hosts. We were having a BBQ for supper, and I joined Ann out in the garden as she picked out our sides. Potatoes, lettuce, chives, peppers, zucchini, cucumber, beans, hot peppers, they were all on the menu. For meat, we were having steaks and sausages. It was a wonderful meal in the backyard in the still evening and great temperatures. Who could ask for anything more? After the meal, I was working on captioning pictures while Murray and Anne read the paper. Before the end of the night, it was decided we might want to do a little stargazing, as it was very clear. Unfortunately, it was also almost a full moon, so the lighting was not ideal. Murray is a bit of an astrology buff, so he was able to point out a number of the points of interest and rhymed off a few facts while at it. We were disappointed that it was so bright, otherwise, we probably could have spent hours out there with the guide to the Southern Skies and the binoculars. However, since I was still wiped out, I was okay with just a quick tour, and then I was able to head to bed around 10pm.

Next day was to be a short ride of about 30 km to Picton, and then across on the ferry to Wellington for a night there, before I make my way up to Otorohanga, and the Luckie Strike Caves. More on that hopefully in a couple days. For now, that’s all there is on Blenheim. Hope everyone has a great long weekend and super Easter, and don’t forget to check back for more Steve stories!! 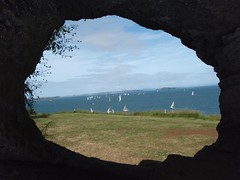 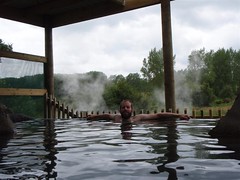 05/01/08
Greetings from a well-rested and soaked PassiveSteve. Yes, today has certainly been one of my most inactive days of this trip thus far. However, it has been far from a boring day, and I’m definitely glad to finally take a ‘personal day’ to recharge mind, body and spirit! So just what makes this day so passive? Well, for starters, I only biked 30km, and I only left Rotorua around 10:30am. The late start was not only due to my short riding distance, but also my late night listening to live music. I’ve only headed a bit south of Rotorua to an area known as Waikite, where the Te Manaroa Spring is located. This is the largest single source of boiling water, which puts out about 40-50L of 98 degree water per second. Even though it was a short day, I’ve still put together a little map for you to look over, with some pictures of the thermal pools at my campground. Read on for more on this quiet day. 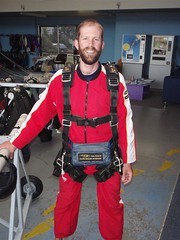 06/01/08
Hello everyone. Well, the day of PassiveSteve is over, and today it was back to donig some real work, as well as starting to do some of the real exciting stuff. Of course, I’m talking about the fact that I did a great skydive this afternoon, complete with a 45 second freefall, after hurling out of an airplane at 12,000 feet. Can you say sweet? Of course you can, and so did I! The jump was almost a bit of an afterthought in my day, but I’m awfully glad that I did it, in spite of the fact that it was anything but cheap! Before I finish the story of how I came to be crammed into a tiny airplane high above Taupo, let’s roll back the clock to this morning at Waikite Thermal pools campground, shall we? Check out the map and read on for more details.